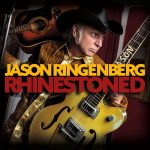 All That Glitters IS GOLD!

Legendary artist, Recipient of 2008 Americana Music Association Lifetime Achievement Award, frontman of Jason and The Scorchers, and AKA Farmer Jason

Someone who needs no introduction:

“The Godfather of Americana”- Mojo (U.K.)

His new record, once again, sets the songwriter on a collision course with people’s souls.

Legendary alt-country pioneer Jason Ringenberg spits and polishes his new album Rhinestoned as it readies for release on March 5, 2021, on his Courageous Chicken label. This marks his sixth solo album, and to him, it was an “unexpected blessing,” for Jason initially wanted to take some off from the showman’s life at first, but fate had other plans, and once again, he found himself with an album full of songs. Along with his longtime compadre, producer George Bradfute, the two-set sail in the summer of 2020 to record. “I was faced with the same decisions everyone else in the world faced: how to connect with folks in a disconnected world. I decided to create a new record. Rhinestoned was birthed in masks and social distancing.”

The songs on Rhinestoned came out as the times were changing right before his eyes. “The songs came out rather heavy; I reckon that was to be expected,” Jason explains. This album has its fill of love, spiritually uplifting, heartbreak, history lessons, and even the covers were intentional for Jason. He wanted to choose from the American country songbook from different eras, from early the Carter Family days to a Hank Williams, Sr classic to an old hit from rockers The Ozark Mountain Daredevils. His choice of the Methodist Church hymn, “Christ The Lord Is Risen Today,” reveals his Christian beliefs’ unwavering stance with family backing vocals.

Songs like “The Freedom Rides Weren’t Free” talks about the sacrifices made by the young black and white folk who fought during the Civil Rights Movement in the 1960s. He references the Nashville marches and other events that shaped the historic time in U.S. history. The song was written right before the major racial unrest during the summer of 2020 – a premonition for the gifted songwriter.

Jason also tells the unknown story of an old Lakota/Oglala legend that one of Crazy Horse’s cousins rode and fought beside him through every battle to his death at Fort Robinson in Nebraska. The song “I Rode With Crazy Horse” is a loosely told tale, but Jason nails the suffrage and endurance it took to fight for their native sacred land. “I heard the song in a dream, woke up, and hummed the melody into my phone recorder,” says Jason. Sadly, history didn’t record his name.

As the ghosts of Nashville come and go, Jason takes a hard look at his beloved city and how it has grown both physically and personally in the song “Nashville Without Rhinestones.” As the song depicts, the once rhinestone adorned country music stars are now fading out to pasture to be replaced with the trendy hipsters and their crafted beers. In the creative ending of the song, Jason sings “soaked in sweat and sorrow,” and he pairs it with a year starting from 1963 to 1923, paying homage to his love of the vintage years of country music from the 1920-60s.

The radio single “Keep Your Promise” is a rowdy heartbreak song in the key of Jason Ringenberg; it’s got the twang and driving drums that are familiar with his songs. Filled with heartbreak, spitting bitter words around, he barks about breaking promises to a scorned love:

“But darling, you can cross your heart

And hope our love won’t die

But you’re as good as your word

And from what I’ve heard, baby, the word’s goodbye” – “Keep The Promise”

As he and George Bradfute began the Rhinestoned recording process, they realized it would be a lonesome process as they followed the COVID-19 gathering protocols. Fellow musicians came in to lay down their tracks one at a time; Steve Ebe (Carl Perkins, Marty Stuart) on drums, Fats Kaplin (Jack White, Hayes Carll) on steel guitar and fiddle, then rounding it out with Jason on guitars and George on everything else. “Most of the time, it was just me and George hammering away in that storied basement,” Jason reflects. The storied basement studio once belonged to the great Jim Reeves, a noted Nashville star from the 1950s – who probably ‘sat’ in on a song or two.

In 2018 he released Stand Tall – a rebirthing of his career when he was invited to be an artist in residence at the Sequoia/Kings Canyon National Park. He spent a month exploring nature and performing shows at the campgrounds, and writing songs. He experienced the energy of creativity he hadn’t felt since his salad days with his old band, Jason and The Scorchers. The album was well-received by both critics and fans alike.

Jason Ringenberg’s story goes back a bit to Northern, IL, where he was born and raised on a hog farm, bordering the legendary Rock Island Railroad Line connection. But on July 4, 1981, he loaded up the van and headed towards Music City U.S.A. to kick some ass and take down some names. And since that day, Jason continues to break down walls and barriers with his music.

The Scorchers backed Jason for over two decades that gave way to be touted as the “Mick Jagger of Country-rock” by some critics. They went on to tour endlessly worldwide, getting a lot of radio airplay and landing on MTV for their video, “White Lies.” The band released eight studio albums were top billing at shows and festivals and rubbed shoulders with fellow southern artists like R.E.M., The Long Ryders, Rank and File. This sound catapult Jason and his band into a new genre called ‘cow-punk,’ which would later mature into Americana.

“…one of America’s proudest rebels, it is hard to imagine the current Americana scene without his pioneering work…” – Rolling Stone

Country Music Hall of Fame senior director Peter Cooper once said, “Jason Ringenberg is Nashville’s greatest 20th-century rock ‘n’ roll frontman.” With statements like that, you would think Jason might rest on his laurels now that he is in his 60s. No, not him. He’s just getting his second wind.

“When wheels are rolling, sometimes I see

The road stretching forever to eternity

Is there a purpose both weak and strong

Get in the car, go for a drive, and turn Jason up.

Uncategorized
With a mega watt smile and her booming voice “”Lee Taylor is a voice to watch!” – William Bell
Blues Matters (U.K.) once repeated the word on the street: “if anybody went down to the crossroads and let the Devil tune his guitar, it was probably Eddie Turner.”