With a mega watt smile and her booming voice “”Lee Taylor is a voice to watch!” – William Bell 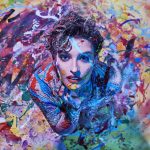 Leaves It On The Stage With

Standing at 5 feet tall, Lee Taylor’s voice and stage presence is larger than life. Her 1000-watt smile matches her exciting talent, mixing jazz, big band, and most importantly, classic soul music. The sound is refreshing. Her voice addresses love, social and racial injustice, along with political stances that come together as one big message: “Joyful and wanton, this album also serves as a liberation anthem. It’s loud. It has the last laugh. Wild Woman dances on the ruins of a world that was built to break us.”

Wild Woman was recorded live on October 9, 2019, at The HiFi Loft in NYC, with an incredible backing band of talented musicians that includes The Dap-Kings, Mark Ronson’s studio session players, and some of Lee’s friends like rock and blues artist Nicole Atkins. Produced by Lee and Binky Griptite, the group bottled and corked lightning with their second rehearsal – the actual show.

Lee has been dazzling audiences for a long time with her blend of blues, jazz, pop, and gospel at her live shows. Her voice has been described as “distinctive” by legendary bassist Darryl Jones (The Rolling Stones, Miles Davis), “uncommon” by The Memphis Commercial Appeal, and as “a voice to cut diamonds,” by The Canberra Times (Australia).

Legendary artist William Bell called her new album “A refreshing return of real music and live performance energy! Excellent vocals, musicianship, and arrangements! Lee Taylor is a Voice to watch. I give the record Five Stars!”

From the salute to LBGTQ+ icon Marsha P Johnson to “Grateful” to the title track, “Wild Woman,” the album is chockful of some grooves and hooks.

“Wild Woman” – is a mission statement to all women, no matter what they are – for it only matters for who they are. “In a misogynistic, queerphobic, transphobic world, “Wild Woman” celebrates wildness as a form of survival. It articulates a triumph on our terms. When we collectively step into our power and find steadfast fierceness, revolution follows.” – Lee Taylor

“Grateful” – the second single, which came out just days after 2021, rang true, and it was a song that Lee feels has a universal message that is timeless as we all get through our days. “I wrote this during a time of mental duress in June 2019.  After experiencing a breakdown, I woke up, walked to the piano, and was grateful for another day,” reflects Taylor.

“Miracle” – “I was touring in Australia and developed a habit of talking with the horn player after our shows. One night, we were speaking about Climate Change. He expressed his hopelessness about the situation. What could we do to stop it? Aren’t the large corporations causing the most damage? The next day I wrote the chorus for “Miracle” on my mini keyboard. The same year, Australia and the United States experienced some of the worst wildfires in modern history.”

Lee wrote, “Pay It No Mind” after being a tour guide for all the closed lesbian spaces in the Village in New York City. She would speak about Marsha’s life, and one night after a guide, with a sold-out crowd at The Stonewall Inn (where Marsha threw the first stone at the police in 1959 for Gay Rights), Lee and the group went into full-on dancing to Tina Turner. “My goal was to write about her life in a way that would make people move since I know joy and action were paramount to her existence and her rebellion. Thank you, Marsha P Johnson, for the gifts you gave to the world. This song is for you. Black Trans lives matter.”

“They even made a Warhol

Then they kicked me out the store

In 73′ I got banned from pride

Grabbed my banner, and when in front

After Lee recorded the track, she had the chance to meet Marsha’s family on Pier 45, where Marsha was believed to have been murdered. She was attending a STARR event for Marsha’s birthday, and Mariah Lopez Ebony, the executive director, introduced her. “It is with honor and gratitude that I am partnering with the STARR and the Pay it No Mind Foundation to raise funds and awareness for the first statue of an LGBTQ+ person in the state of New Jersey.” Marsha P Johnson’s statue will be raised in her hometown of Elizabeth, hopefully in the near future. “Marsha is the reason all of us can be free,” Lee smiles.

Lee’s solo appearances include The Blue Note and Lincoln Center in New York City. As a Resistance Revival Chorus member, she has performed with Phillip Glass at Carnegie Hall and with Jim James on the Tonight Show Starring Jimmy Fallon. With her popular all-woman band, Frilucha, Lee performs at several popular New York venues, including Dyke Bar Takeover and The Django. In December 2018, she released her first single, “My First Divorced Christmas,” now available on the Daptone Soul Super Store. “Wild Woman” was also featured on the compilation record, This Joy, released on Ani DiFranco’s Righteous Babe Records back in Fall 2020.

Her spirited ongoing mission is to spread the word of Wild Woman everywhere: to take notice and watch out!

For more info on Lee: http://loveleetaylor.com

Uncategorized
Meet The Tummies – a Brit-pop-rock band that will swing, shimmy and sing into your “Little Blue Heart”
Jason Ringenberg spits and polishes for new album Rhinestoned out on March 5