Blues Matters (U.K.) once repeated the word on the street: “if anybody went down to the crossroads and let the Devil tune his guitar, it was probably Eddie Turner.”

Blues Matters (U.K.) once repeated the word on the street: “if anybody went down to the crossroads and let the Devil tune his guitar, it was probably Eddie Turner.” 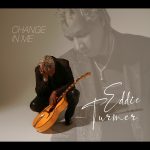 Eddie Turner – CHANGE IN ME

“I’VE GOT A STRANGE COMPLICATION

I CAN ONLY SEE WHAT I CAN SEE

A CONSTANT FEAR, A TREPIDATION

ALL THAT WALK THIS SHADOWED ROAD” – “Dignify Me”

Eddie is a guitar symphony. He has a mind for complex compositions and lyrics as his Fender axe sizzles with a sublime blend of contemporary blues, new jazz, a Delta drone, Pink Floyd psychedelia, and world music stylings.

In fact, as an interview in the now-defunct Blues Wax magazine opens up, writer Stacey Jeffress asked:

Stacey: “Are you from another planet, Eddie?”

Eddie Turner’s fourth studio album, Change In Me, takes the listener on a seductive journey of jazz, blues, and rock – a melting pot of sounds with his expressive voice overlaying. The guitar work on this album is pronounced, a little hot and cool with a lot of attitude. Produced by Kenny Passarelli along with Tim Stroh and Eddie, the three-headed producing monster sharpens the songs to a diamond cut. This album was recorded in two places; Studio 99 in Brooklyn, NY, and Mad House Recorders in Leadville, CO and will be released on May 14, 2021, via Eddie’s 7-14 Records which CPI, Inc, distributes.

As his longtime friend musician, Kenny Passarelli describes Eddie, “A visionary and maybe, a misunderstood artist. I believe this new production is going to launch him in a new direction.”

Songs on Change In Me are a focused stream of conscious for it was the first time Eddie came in with lyrics to the song instead of music. Eddie followed the song’s mood to create the song; if it felt right – he kept playing in that direction, and if he didn’t like it afterward, he’d change it. The flow of the melodies and rhythm section is water-like, transparent, and yet opaque at the same time. His voice is a smooth tenor with intentional inflictions, without yelling, to get his point across. The production team created layers of sounds with B-3 organs, female vocals, and guitar pedals that are full of life. “Turner has developed a sound that’s informed by tradition yet adventurous enough to not be limited by it” – Classic Rock Here And Now

“If you want to be a purist, be one not because you started there and stopped there. Be one because you went everywhere else and decided to come back. Because no music is truly pure; everything has a little dirt in it,” Eddie explains.

The characters in Eddie’s original songs never have the same gender – the protagonist could be a man or a woman, and sometimes it doesn’t matter, right? As he writes about racial and social issues in the songs “Change In Me” and “Dignify Me,” Eddie provides poignant lyrics, as it mixes well with the other instruments. In his cover-song mash-up of “I’m Waiting For The Man/She Caught The Katy,” it’s one of the highlights on the album, for Eddie took the music of the Taj Mahal favorite and overlaid his own lyrics at the end of the Lou Reed classic. Two back-to-back songs, “Another Sign Of Weakness” and “Whoa, Whoa, Whoa,” are almost mirrors of each other. When people meet musicians, one thinks that they must have a carefree life, playing onstage, traveling, and winning awards. But it’s a true calling and carries a lot of emotional baggage that leaves someone like Eddie – questioning himself, his path, and his future.

Born in Cuba and raised in Chicago, he would get into music shows to see the greats like Muddy Waters, Jimi Hendrix, and Clash. He got the music bug at 12 and decided that was his path in life, and he got his education by sneaking into the local clubs or hanging out in the alleys. He and his friends would jam every weekend at someone’s house and “argue about who copped Clapton’s solo the best in “Crossroads” or whatever. You know; what kids do.”

Eddie joined Zephyr and was a part of their last album, Heartbeat, in 1982, and the group ended when lead member Candy Givens died in 1984. So, Eddie took a break from music and got into real estate. Then his close friend bass player Kenny Passarelli (Joe Walsh, Ringo Starr’s All-Star Band, Stephen Stills) called him to form The Otis Taylor Band, a stint that lasted for about ten years for Eddie. They toured all over the U.S. and Europe, which gave Turner a taste of the full-time musician life, which he loved. He went on to record five albums with Otis before leaving the band in 2004. “Turner remains a scorching player’ – Westword (Denver)

A life-long student of music, Eddie tries to echo the energy and passion he has behind his guitar and vocals to the listener. “Vocal-wise, everyone keeps telling me I sound like (Jimi) Hendrix, which I don’t think so, but I’m not going to fight it,” he said. “But if I could, I’d sound like Bobby Blue Bland, who is my favorite singer of the blues. He’s one of the greatest blues singers ever, along with Magic Sam; who I also love.” (from Blues Blast mag 2011). Eddie has released three studio solo albums (Rise, The Turner Diaries, Miracles & Demons), one live album Naked In Your Face, one Zephyr album, and five Otis Taylor releases.  He has appeared and played on jazz trumpeter Ron Miles’ My Cruel Heart, album, and a compilation called Rocky Mountain Low – that spotlighted Denver area artists.

His influences run from Miles Davis, British Blues to Rock to classic rock, “you’ve spent your life listening to every great player, and you try and sneak in those influences,” Eddie Turner (from Blues Blast mag 2011).