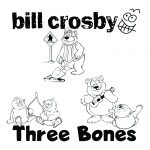 “You need three bones to have a happy life,” Bill sings on his new cd: “A wishbone, a backbone, and a funny bone!”

Three Bones Album – Out on September 27

“I write funny, catchy, and insightful songs for kids and adults who don’t act their age.”– Bill Crosby

Nashville based singer-songwriter Bill Crosby is addressing every kid in the room, whether you are 5 or 55, with his seventh album, Three Bones out on September 27. He addresses fun and positivity with songs like, “Bears Luv Cupcakes,” “Loose Tooth,” and “Beautiful Day” through imaginative lyrics and sophisticated music. Recorded with his longtime producer Marv Treutel’s Nashville studio where the two of them knocked out with some of Nashville’s seasoned players.

Bill has an ingenious way of creating songs that not only get in your ear and make you sing them all day long. His songwriting style is a twist of pop and country with a little bit Mister Rogers philosophy that serves as the secret sauce to teach the young kids the Golden Rule to love is all you need. Through his humor and smart wit, he creates colorful characters that are very infectious for everyone of all ages. Many parents might even connect Shel Silverstein to Bill, like a modern-day version of the quirky writer.

The video  for “Bears Luv Cupcakes” was loosely based on an actual internet story, that inspired Bill to write the song. Shot on location in East Nashville, TN in his friend’s kitchen,  Bill put on his co-Directors hat, and rallied his friend, Tyson Lammel to play a bear (who has some acting skills). He set up the scene in the kitchen, placed some more friends in it, and his videographer Gregg Hutchins, filmed it. This quirky, and fun video, followed the lyrics, in order, as the scenes unfolded. And, of course, everyone had a cupcake afterward!  The actors, and host family(and daughter,who makes a cameo), sang along during playbacks. “That’s always great validation for a songwriter, to have kids sing with me,” Bill smiles as he explains. Check out the final masterpiece: https://youtu.be/yr7OWaZF6GcT

Taking cues from friends, young fans, and life experiences, Bill uses those ingredients to mold his songs together.

“Three Bones” – This song came about from my friend, Keith. He saw a tv interview in Florida, about a woman who had lived to be a 100. They asked her. ‘What’s the secret to a long life?’ She replied, ‘You need a wishbone, a backbone, and a funny bone.’ This song has a New Orleans groove, and it has been a live staple ever since I wrote it.

“Bears Luv Cupcakes” – I was inspired by a story I saw on the internet: A dad was making cupcakes for his son’s birthday party, and he’d left the room for a while. When he came back, there was a bear in the kitchen! Can you imagine?!! It’s got a Johnny Cash groove, and some tasty guitar from Danny Parks one of my favorite guitar players in Nashville!

“Loose Tooth” – I was playing my regular gig at Family Wash, in East Nashville, and a youngster came up to me and exclaimed, ‘I have a loose tooth!’ by pushing it side to side with his tongue. I knew I had to write that one. I wanted to do a funky song, and with the horns blasting on the song, it paved the way!

“Who Pooped In The North Woods?” – I was visiting my cousin and her friends in the Adirondacks. We were taking a walk and saw something in our path; something a “big creature” left. The funny part was, in a store later, my cousin held up a book with that title and told me I should write a song about it. I wrote it that afternoon, and eventually, sent it to the author, Gary Robson of the book: he loved it!

“Beautiful Day” – I was at the beach with some family, and my nephew spent all his time on his computer. I would walk by, every morning for a week, and say, ‘It’s a beautiful day!’ The song didn’t take long to write since I’d been saying it a lot. My longtime friend, Scott Mayo, played the saxophone on the song which added more depth to the production.  This song has everything I like about music: catchy, fun, and funky and a tuba.

So, kick back and give this fantastic album a listen, I bet you get hooked! 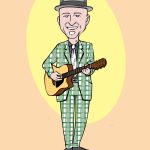 Bill grew up in upstate New York is mother was a teacher, and his father was an insurance salesman and he spent a lot of his youth, as Bill puts it, “…fighting with my brothers and trying to make milk come out my sister’s nose during family dinners, riding bikes, watching tv, listening to rock ‘n’ roll AM radio. My older brother bought a guitar, and I played it more than he did.” His first band played all Chicago cover tunes back in high school where he and his buddies would sit in class transposing horn parts. He learned to play three instruments; trombone, classical guitar, and tenor sax and played each, so well; he was indeed a bonafide “band geek.”  He attended college Ashland University in Ohio, where he immersed himself taking music composition classes and continue his guitar work for Bill knew he had the songwriter’s touch.

Bill spent the 80s after college in Cleveland, OH in bands of all sorts; a funky all original instrumental band called Optional Stop. In his words, “we played everywhere to no one. We let my girlfriend start singing with us, and we became a pop/funky instrumental band. Then the group fell apart, so I started writing songs on my own.”

Bill got the bug to move to Nashville in 1997 with a bucket of songs, a guitar and set up his own publishing company called Winter Zen Music. He has played around Music City, at various family-friendly establishments, libraries, and small theatres. His music was featured on Dan Patrick’s website sports show – for his Meat Friday segment; with his song, “Get Your Hungry On” and there’s a video of it unfolding, where they love the song – live! As Bill says, “I was aghast, exhilarated, and excited to hear them play it, and, say my name! This show goes out to 300 radio station affiliates across the country – talk about maximum exposure. I joked with my family that I would probably never be more famous than I am today.”

So, whether you are 5 or 55, give Three Bones a listen. It’s one of those albums that will allow you to sing and dance as you please.

Who Pooped In The North Woods?