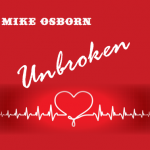 As he circles back to what matters: his inner peace

“I’ve fought my share of battles. None has been more prominent than the battle I’ve waged inside myself”  – Mike Osborn

Unbroken is the title of Mike Osborn’s third album, and the sentiment is most accurate for it defines his continuous journey of self-realization and inner peace. He’s been looking back to figure out where he is going, and with that, he’s careful of each step along the way. The album was produced by Randy Ray Mitchell at Akadack Studios in Van Nuys, CA with musicians Johnny Griparic on bass and Tom Fillman on drums help flesh out the songs. Unbroken is set for an October 25th date on his label, Je Gagne Records.

Mike Osborn has a recognizable story of moving a family, music, odd jobs, family and heartbreak and a heart filled – then circle back to the beginning; we’ve all had it happen to us. Humans have a connection that way; it’s our way to relate and get to know that person.

From the opening song to the last song, each holds a significant meaning within the weathered musician; whether he’s standing up or confessing his love or learning from past mistakes, his vibrant and colorful voice expresses the right amount emotion. He revived his very first-ever written song, “Why?”; an anthemic song for hard workers from the mills, to the plants to fields all working for that weekend beer. Songs about family include; “Family Crest” has an absolute throwback to the classic southern rockers The Outlaws’ tune “Green Grass And High Tide,” and a tear-jerker softie,  “Momma Must Be So Proud” to wearing both hats as a single parent on “Mother’s Day” which will remind you of the Merle Haggard song, “Keeping Things Together.”

“NOW I STILL REMEMBER HAVING TEA TOGETHER

AND SINGING YOUR ABC’S

ID COMFORT YOU WHEN YOU CRIED

PICK YOU UP WHEN YOU FALL

COME TO YOU WHEN YOU CALL” – Mother’s Day

Osborn decided to record, “For The Last Time,” which was written by Al Mirikitani, in honor of his friend who produced his sophomore album, In The Dog House. Alan was best known as “B.B. Chung King,” lead singer of The Screaming Buddah Heads, an L.A. blues-rocker that had some great success in the 80s and 90s. Mirikitani, died a few years ago, at the age of 60 of a sudden heart attack that gutted Mike, for the two had a lot in common from guitars to core personal values, and writing good songs. They both felt like a song was to be continued around the circle so it would not be unbroken.

Trust is a hard word, and it’s harder for us that have been let down by those who are close to us.

MY SWORD AND SHIELD

IS A GUITAR AND AMP

MY RAIDING CREW IS

NO NOT MUCH HAS CHANGED

When you talk to Mike Osborn, who has deep Norwegian roots that go all back to the Viking community, his face lights up because they are about family, honor, and local community; which are his core values. He has traced his roots almost 1300 years ago to what is now present-day Edinburgh, Scotland and that’s how the song, “Family Crest” was written. He even will treat audiences to wearing a traditional kilt.

Mike was born in Illinois and moved out west to California when he was a young boy, did the teenage angst stuff, got married, had kids, and got hurt on the job. That injury gave him some time to sit and practice his guitar and songwriting to pass the time away. Mike got excited once again with his music that he began to pursue it full time.

After several years, Mike embarked on a lengthy hiatus to raise four children as a single father. He re-emerged first on the cover band circuit, fronting a full-fledged Stevie Ray Vaughan tribute act, before joining the house band of a local San Jose blues club and eventually going on to perform his original music, as a solo act. It was during this time that Mike honed his skills as a live performer and got the confidence needed to continue. Audiences took notice, and he became a favorite in the local community.

In 2009, Mike released his long-overdue debut album “Fire and Fury,” a ten-track collection of songs that was produced by Bay Area blues heavyweight J.C. Smith. Filled with original compositions that showcase Mike’s unique point of view and thoughts about life, but also includes his compelling take on the Bill Withers classic “Ain’t No Sunshine,” which is a crowd favorite.

Mike released his sophomore effort “In the Dog House” in 2014, and it was produced by the late great Alan “B.B Chung King” Mirikitani. The album is made up of many of Al’s own compositions along with Mike’s demonstrating a newfound maturity as a songwriter. The album was dubbed “In the Dog House” after Mirikitani’s home studio and where they recorded the songs. Sadly, it would be one of his last completed efforts before he passed away suddenly in 2015. Mirikitani’s death shook Mike, who vowed to carry on his mentor’s legacy in his absence.

The album was warmly received by fans and critics alike, with Downbeat Magazine awarding it three and a half stars. It would go on to top the Roots Music Report Radio charts and chart at #1 in the European based “Hit Tracks Top 100” Chart. He performs regularly with his band around the northern California area and makes the journey back home to the Midwest in Illinois each year. In 2017, he was recognized as THE BAND OF THE YEAR by the Northern California Music Entertainers Awards. He is endorsed by Epiphone Guitars, GHS Strings, and Egnater Amplifiers.

Unbroken is a defining album for Mike, as he embarks on yet another musical journey setting his sights towards the sun.