Do you know where the Hidden Hills are? 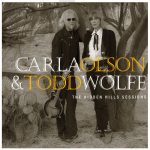 Renown recording artist, songwriter and producer, Carla Olson has worked with some of the best, including John Fogerty, Mick Taylor, Ry Cooder, Gene Clark and others. Teaming up with ace guitarist and composer, Todd Wolfe (Sheryl Crow, Stevie Nicks) they deliver a stellar album destined to become a classic. Recorded at Michael Reid’s Rancho Relaxo studio in Hidden Hills, California, with Olson and Wolfe playing all acoustic guitars and mandolin (Wolfe) and a few long-time musical associates including bassist Tad Wadhams (Lowen & Navarro, Sheryl Crow) and Victor Bisetti (Los Lobos, Mathew Sweet) on drums and percussion. The album includes several covers that the duo truly makes their own, which have become audience favorites at their live shows including Steve Windwood’s classic, “Can’t Find My Way Home” and Gene Clark’s beautiful, “In A Misty Morning.”

From an interview with Todd Wolfe:

What inspired you to make this album?

I had planned on moving back to L.A. and at some point afterward, putting my own band on hiatus. Knowing I’d be in L.A., I wanted to work with Carla again, so I suggested putting together some songs for acoustic performances. Once Carla and I started to make more appearances as an acoustic duo we thought the next logical step would be to go into a studio and record some of the songs we were performing live as well as writing some new songs together and that became The Hidden Hills Sessions as we started this process the new original songs starting coming together thus solidifying the notion to record the full album.

What made you choose the recording studio location?

Carla has often been working at Michael Reid’s studio Relaxo, producing and even recently recording the Textones reunion album so she’s very familiar with the studio as well as working with Michael Reid who runs the studio and they’ve become very comfortable working with each other on various projects. When Carla introduced me to Michael and the studio I was all in!

Working with Carla has always been fun, and this was no different, writing and recording as a duo! Now for the next step, getting out there and bring our music to people live and then who knows … A full band? Electric album next?

Check out more on the duo: https://www.facebook.com/cbotsw/