Turn that steering wheel sharply to the left…. ahhh now you got it… 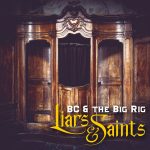 BC & The Big Rig Make Doughnuts In The Parking Lot

The band stands tall next to bands like Blackberry Smoke, The Allman Betts Band, and Reckless Kelly

Nearly a decade ago, Brandon Clark said out loud, “this is the band, the sound I’ve been searching for my whole life.”

Oklahoma’s OG rock band slams on the gas – get ready to spread the shred.

For the band BC & The Big Rig, windshield time will be abundant as they ramp up support for the new masterpiece, Liars & Saints, due October 15, 2021, on Horton Records. Recorded at the heralded Blackbird Studios in Nashville, Tenn., Liars & Saints is a sheer display of cleverly crafted lyrics and marksman-level musicianship.

After this past year, BC & The Big Rig is ready to spread its guitar-heavy roots-rock hybrid (lovingly known as “shred-dirt”) to a broader circle of bars, clubs, bike rallies, food truck courts, stoned hippie pop-ups, pin-drop listening rooms, rock festivals, country festivals, and blues festivals. This is a warning; no corner of the live music landscape is safe from their guitar-mageddon.

“We are one of the hardest working bands out there,” Clark says, “just put us in the van, load up the trailer, and get us on the road.”

Clark fronts the band vocally and is no slouch on guitar, and he’s flanked by a pair of Oklahoma six-string kings, Ryan “Danger” McCall and Sam Naifeh. They pile on layers of harmonic ear candy over the foundation laid down by bassist Chris Bell and drummer James Purdy.

“We really enjoyed doing a destination recording,” Naifeh says. “Our previous record was also a destination record, and there’s just something that happens when you’re away from home. There’s more of an urgency, realness, and finality to the process. We are fully capable of recording ourselves at home. But that freedom of being home and the ability to try different things is almost too much. The constraint of traveling helps us stay focused and on point.”

“I’ve run with trouble for years that’s pushed me around.

I got my hopes up just to be let down.

But I found luck down a dead-end street.

I wasn’t looking for it, so maybe luck found me.” – “Won’t Sleep Tonight”

After a heady intro, you will be set on fire with the opening tune, “Liar,” a powerful proclamation that instantly displays the high level of effort and production into the album. “The Shakes” draws up your anxiety, but something in the confessional brings clarity to what Clark describes as an otherwise chaotic scene. These sentiments are also echoed in the expertly arranged “Little Devils. “This song is about siblings fighting for rank. Massive drums and scorching guitars create a moodiness that represents the calm before the storm of an everyday functioning family.”

“We went into the studio with the freshest batch of songs yet. Normally we’d have been playing the songs for a while by the time we record them. Most of these songs were still babies when we tracked them,” Bell reveals.

Though The Big Rig means business on this album, it’s not all too serious. “Kid at Heart” and “Long Way to Fall” are also reflective narratives but served with a much softer touch – proving that these guys can fill a record (and the live show) with an entire range of dynamics and emotion. This album undoubtedly will seal the appeal to a broader spectrum of music lovers.

“A father to my children. A husband to my wife.

A slave to the grind of an old musician’s life.

I’ve got so much to say, but nothing ever comes outright.

I’ll keep dancing with my demons late into the night.” – “Long Way to Fall”

Fat grooves are also all over the record; the NOLA-flavored “Saint” is a perfect drum and bass stomp that begs for extended guitar exploration as Clark fights it out with the devil that ‘keeps whispering in my ear.’ At the same time, the reading of Bob Childers’ “Rainbow Rocker” flies to higher levels than ever before, with Naifeh and McCall at the controls.

“Liars & Saints was an absolute treat to record,” Naifeh says. “Having the opportunity to record at a world-class facility was unreal. Being an audio nerd, I was in my happy place there. The Neve 8078 console in Studio A sounded amazing, and the engineers were total pros and outstanding people. We’ve been lucky to work with several great engineers over the years. Jaron Nix mixed the record at his studio in Marlow, Okla., and Adam Chamberlain mastered the record in Oklahoma City.”

Humbly, Liars & Saints results from years of individual and collective work to put out their highest quality recording to date on what is arguably Oklahoma’s best independent label, Horton Records.

“Working with Horton makes me feel like we are supported by people who believe in our music. People are listening to what we are doing and want to contribute. That’s a nice feeling to have. So many of our friends are with Horton, and it’s like being a part of a big musical family,” says McCall.

Beyond music, the Oklahoma roots run deep for all five members of the band. Though they live in different communities, they all agree Oklahoma is home.

“Being an Oklahoman is special,” Purdy explains. “There have been so many great musicians from so many genres come from here. It’s a good feeling when people hear you’re from Oklahoma, and they expect more from you because of what they are used to hearing from here. If that makes any sense, it’s special to represent Oklahoma as a musician when we’re out of state.”

When you get down to it, we’re all liars and saints at points in our lives; we are heathens and healers, fools and fishermen, fathers and mothers, sisters, and brothers; BC & The Big Rig have sonically represented and packaged hat up for us all to stick in our ears.