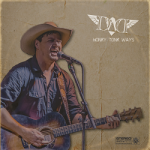 He Wants You To Accept His

“Daryl constructs a long-disappeared nostalgic musical landscape, peppered with introspective musings and heartbreaking laments, with a traditional firm structure that would put other contemporary artists’ claims to tradition to shame.” – Nashville Gab

On his new album, Honky Tonk Ways, Daryl Wayne Dasher’s rich baritone voice may be on the vintage side, but the subject matters aren’t. His voice will remind you of the classic country sounds from the 1960s and 70s – like Marty Robbins and Ray Price and those who have carried the torch over the past 25 years, Chris Isaak, Orville Peck, and Raul Malo. The album was recorded and produced at Zach Kasic’s Wild Feathers studio (Jamey Johnson, Old Crow Medicine Show) in Hendersonville, TN, and released on September 10, 2021.

Created throughout the 2020 Covid19 Pandemic, Daryl made something original and refreshing; it’s sure to be a favored album. He wrote songs with Linda McRae via Zoom, while others recorded remotely and in the studio with social distancing restrictions in place, bringing in some of Nashville’s finest players. Daryl and Zach brought in players like The Mavericks horn player Lorenzo Molina Ruiz, multi-instrumentalists Scotty Sanders (Sam Hunt, Mandy Barnett) and Jim Van Cleve (Mountain Heart, Doyle Lawson), and his longtime friend and former bandmate, Andrew Adkins. These players expanded and fleshed out the songs wonderfully.

The songs on Honky Tonk Ways aren’t just a collection of songs that will tug, pluck, and grab you. They are full of perspective and gratitude during a global pandemic that had everyone looking around at their lives through the living room window like in “Trippin Around The Sun” and “Something’s Changed.” His dear friend Andrew Adkins wrote one song, “Revolver In The Field,” inspired by the 2018 movie Old Man And The Gun starring Robert Redford. The song describes someone who is running from their fears and having it all catch up with them. Having Lorenzo Molina Ruiz in the studio gave it that authentic horn sound reminiscent of Johnny Cash’s “Ring of Fire.” Daryl explains, “The lyrics, the melody, the attitude, and that unmistakable Western vibe all spoke right to my soul. It is a song of desperation, of finally facing one’s fears and trepidations in order to move forward.”

AND of course, Daryl would not miss out on covering one of his all-time favorite songs from Marty Robbins, one of his biggest influences, “Tonight, Carmen,” for the album. Daryl and Zach could bring in some classic country to have Lorenzo himself play horn parts on it, making it sound very authentic. “There were several moments during the session when Zach and I would holler out loud in excitement while Lorenzo was recording,” laughs Daryl. It was a gut reaction to an “only in the studio” moment musicians get while creating; “YES! That’s it!”

As was stated earlier, many songs on Honky Tonk Ways were written with Linda McCrae during their Zoom calls, one especially called “Beyond The Great Pause,” which dealt with the year-long plus restrictions due to the Covid19 Pandemic. This song has some great perspective; as the two writers saw the same news, the same pictures, the same uncertainty, but also both had the same hope for after the pause – “shoot out the stars or rise to the call” and “would we find a better way beyond the great pause?” It’s a great closer to an album that explores a lot of emotions.

Another song on the album is about a house concert series called Silver Maple House Concerts that Daryl has played for about ten years hosted by The Cheplic’s in Pennsylvania called “Beneath The Silver Maple.” As Daryl explains, “0ne thing you can always count on here is a plethora of good home-cooked food, great company, and great music. I’ve made so many friends and supporters over the years at the Silver Maple, many of which are like family to me now.”

Daryl’s journey started in Ohio in a musical family – his father played bluegrass, and his mother is a painter – for he began to play drums at three and then started to play guitar at age four! As a young boy, he played with his dad and his uncle in a band called The Bottom of The Barrel Boys around their small town. A young Daryl wasn’t always listening to the older country songs; he was blaring bands like KISS and The Rolling Stones. Once he hit his teens, he started playing in high school bands with friends. “I was playing clubs when I was only 16. They would keep us in the backroom before and after our shows. All the while, my parents believed we were playing at birthday parties,” he admits with a mischievous smile.

Daryl Wayne Dasher doesn’t sit idle very well. During his college summers, he came down to Nashville and worked security at The Grand Ole Opry and sold boots to tourists and Garth Brooks! He took on many music industries jobs that took him to venues, large events, and even George Jones’ house where the country legend would hold rehearsals in his garage. He became close with the legendary singer and had some great memories. In 1998, he and his childhood friend, Andrew Adkins, formed a popular rock band in Nashville called Mellow Down Easy along with Rodney Russell, and they released four albums and were signed to Dualtone Records. Along the way, Daryl made friends with Jeff Keith, lead singer of the rock band Tesla, collaborated on songs and played in his band Country Music Friends. He’s released four solo albums, four Mellow Down Easy albums, and been a part of some collaborations and productions with indie artists and friends. So finally, in 2002, he put his hat down in Music City after brief moments out in Big Sky Country of Wyoming and Montana.

He’s done many songwriter festivals over the years like Frank Brown International Festival, Pensacola Songwriters Festival and was an original member of The Last of The Honky Tonk Music Series set up in 2014 by Brigitte London. It was a great idea to focus on sustaining the community of musical artists, their needs through venues, media, and more. This group was a game-changer for Daryl, for it put him in circles with some top-notch writers like Jill Kinsey, Lane Mack, and Sarah Douga.

Since his salad days, he’s come a long way from a small-town Ohio, waiting on Garth Brooks at a boot shop, loading up the gear at Possum’s house. See, Daryl is on his way to becoming your favorite artist to listen to, for he brings a little bit of the past, the present, and the future for all listening ears.

Uncategorized
A Better Day A-Coming with Robin & Linda Williams
Turn that steering wheel sharply to the left…. ahhh now you got it…