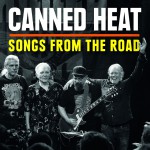 Out On August 7th

The world turns. Fashions change. Bands rise and fall. But you can’t stop the boogie. Fifty years after Canned Heat was founded by blues scholars Bob ‘The Bear’ Hite and Alan ‘Blind Owl’ Wilson in Topanga Canyon, California, the West Coast legends just keep rolling on down the road. “We’re all amazed and thankful that we’re still here,” explain the band, “living our dreams of making a living doing what we all love. Playing the blues, traveling the world and giving a taste of the boogie to audiences everywhere.”

Until they pull up in your town, there’s Songs From The Road. The famous Ruf Records live series has already showcased heavyweights from Luther Allison to Royal Southern Brotherhood. Now, in 2015, this two-disc CD/DVD set finds the modern Canned Heat lineup on blistering form, shaking Bonn’s Harmonie club with a 16-song set driven by the boogie groove that’s practically a strand of rock ‘n’ roll’s DNA.

Led from the back, as ever, by iconic drummer and guardian-of-the-flame Adolfo ‘Fito’ De La Parra, the rhythm section is given further pedigree by Sixties bassist Larry ‘The Mole’ Taylor. On lead vocals and harp, give it up for New Orleans legend Dale Spalding, while John ‘JP’ Paulus capably covers guitar duties for Woodstock-era band member Harvey ‘The Snake’ Mandel (as he recovers from recent health issues). “It’s a capsule,” explains manager and producer Skip Taylor, “of where the band was at on that particular night.”

The Harmonie show might have gone down on March 16th, 2015, but to play Songs From The Road is to step aboard a time machine. As the squall of harp sets up the inimitable strut of On The Road Again, you’ll feel the years roll back. When “Going Up The Country” strikes up, you’ll imagine yourself back in the dappled sunshine of Woodstock in 1969, flicking a peace sign, flowers in your hair. From “Amphetamine Annie” to “Let’s Work Together,” few bands make such an evocative sound, so inextricably tied to the summer of love, yet so fresh and relevant in modern times.

Canned Heat’s place in the pantheon of the greats is undeniable, and their importance to the blues inestimable. The LA outfit began in 1965, born not from commercial interests, but from a deep love of the genre, as Hite and Wilson evolved from their roles as vinyl collectors and blues aficionados to lead the nascent lineup. As slide god and super-fan Sonny Landreth recently noted: “Canned Heat were, like, the ultimate white-blues aficionados. These guys, they were so into the blues, way ahead of other people.”

Even as timeless hits like “On The Road Again”,” Going Up The Country” and “Let’s Work Together” catapulted Canned Heat from hippie favorites to global stars in the late-’60s, the band stayed true to their roots, and fiercely protective of their beloved genre. Hite and Wilson became renowned for their habit of tracking down long-forgotten legends like Skip James and Clarence ‘Gatemouth’ Brown, then putting them back on mainstream festival bills.

The respect ran both ways. As they strode through successive decades with a ferocious live reputation and a growing catalogue of classic albums, Canned Heat were given the nod of approval by their forebears, invited to collaborate with everyone from John Lee Hooker (the original boogie man) to Brit-boom godfather John Mayall. They could be found rocking A-list venues from Madison Square Garden to the Royal Albert Hall, yet never lost their common touch, still holding the record for playing the most biker rallies.

Nor could Canned Heat be derailed by the cruel fate that rocked the lineup. Wilson, then Hite, then much-loved guitarist Henry Vestine would all be lost in tragic circumstances, yet the band always weathered the storm, drafting members with the musical chops and mindset to keep Canned Heat rolling as a cohesive unit. “I think Bob, Alan and Henry would be happy and impressed that the band, and mainly Fito and Larry, have kept the Canned Heat legacy alive,” says Skip Taylor. “And are still allowing people around the world to hear and feel Canned Heat, and the boogie music we all love.”

No doubt, they’d be impressed by Songs From The Road: a snapshot of this iconic band taking yet another audience for the ride of their lives. “Yeah, we got a crowd tonight, boys,” notes Spalding, as the Harmonie club erupts and the band launches into Time Was. Somehow, you know they always will.

Uncategorized
Lead Belly is alive!
The Voice Of The Wetlands 2015 Festival Is On!