Turn it up and slide in the door! 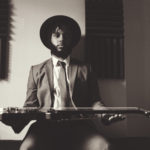 Shouts From The Church To The Streets

Fusing blues, funk, rock, and pop into a genre he likes to call:

Defined as fresh, nostalgic, and electrifying

The energy and passion which resonates from AJ’s music, from the strum of the guitar to the pounding rhythm of the drums, to the outstanding lyrics, is sure to be felt by everyone.  His newest creation, THE NEO-BLUES PROJECT is a 6-song EP set for release on March 16, 2018, on Ropedope Records. AJ aims to create an unforgettable experience for music lovers, with the hopes of taking them to a musical paradise.

THE NEO-BLUES PROJECT starts off with “Do The Rump,” a sexy rendition of the Junior Kimbrough classic, creates a mood for the album by teasing; you can’t be shy. AJ’s slide is flawless and taunting as it goes over the edge with a tambourine hip-shaking ending. “It was an honor to cover Junior Kimbrough I wanted to put my spin on it adding a bit of slide guitar and synth with a touch of jam.”

Self-produced by Ghent at his studio, The Ghent Factory in Atlanta he focused on how he wanted music to flow on all instruments. AJ fires away on any of his axes whether it’s his Jackson Steel Slide King Guitar or his 33:3 custom 8 string guitar throughout the album making unreal riffs while carrying the melody. AJ is a wizard at making it all sound magical!

“Power” is all about having the strength and empowerment to be strong through any obstacle or rough seas that life throws you. He channels his inner Jimi Hendrix, James Brown and Lenny Kravitz through all these songs.

The more you feed me,

The more I grow,

So you can bring it on yea

“Mercy” is soulful and recalls Sam Cooke and Jackie Wilson, as he begs for his muse to be a little more giving back to the relationship. This song sounds like it would’ve come out of Stax Records studio in Memphis back in their hey-day. “Long Lost Friend,” written with his wife MarLa, is a simple ballad that all of us can relate to. Sometimes people come and go and coming back again for various reasons for growing apart and coming back together can be bittersweet or joyous.

I won’t make the mistake no more

Cause the truth is, I was the one in the dark,

And all this time, you’ve been right here – “Long Lost Friend”

AJ Ghent [J-ent] hails from Fort Pierce, Florida and growing up it was all about the music. Music that has truly been running through his family for generations; such as his great uncle Willie Eason, the creator of the ‘Sacred Steel Tradition,’ and his grandfather Henry Nelson, the founder of the “Sacred Steel” rhythmic guitar style. This style is played by many names today, such as Robert Randolph, The Campbell Brothers, and more.

AJ began his music career in West Palm Beach, FL with his sister Tiffany Ghent. There he spent many nights exploring a rich range of genres, from hip-hop to R&B. However, he was in search of something more, a style that was uniquely his own. Fresh with his marriage to MarLa, he set his eyes on Atlanta, GA. When he arrived in ‘A-town’ AJ took on sideman jobs and studio session work. Not long after, AJ met the legendary Colonel Bruce Hampton who began to mentor him; teaching him what mattered the most; “time – tone and space” for all his music and life journeys. AJ was invited to play in Hampton’s band, Pharaoh’s Kitchen, which he did for about a year — and like true Colonel Bruce style, the elder statesman always reminded AJ to be ‘true to himself.’

He has had a colorful career thus far playing and opening for such legendary acts Zac Brown, The Allman Brothers Band, Derek Trucks, Robert Cray, and Gov’t Mule. He can be heard on various recordings with Zac Brown, Luther Dickinson, and featured on Zac Brown’s 2013 Grohl Sessions Vol. 1 alongside Dave Grohl (Foo Fighters). AJ’s band has had various formations, from a trio to a full-size live band with horns, playing small clubs to mid-large sized festivals and arenas; dazzling audiences everywhere. In 2015, he released a DVD/CD called LIVE AT TERMINAL WEST – recorded and filmed at the Terminal West venue in the old King Plow factory in Atlanta, GA. The album was well-received by fans and critics praising the fearless leader! “The 11-song album is a relentless, high-energy romp through gospel, soul and funk-infused landscapes, with a couple of cool-down moments just so the audience can catch their collective breath.” (Relix, 2015)

At the age of 31, AJ Ghent [J-ent] knows where his talent comes from and isn’t afraid to explore other sounds. This Neo-Blues is something different: A musical fusion form that takes art and skill to master, something that AJ Ghent [J-ent] has spent his whole life perfecting.

AJ will be embarking on a tour to support THE NEO-BLUES PROJECT in the US as well as some special dates in Australia! Check them out: