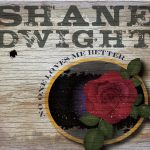 NO ONE LOVES ME BETTER

OUT APRIL 5 ON RED PARLOR RECORDS

Critically acclaimed blues maverick, Shane Dwight, will pull you in his house by the ear after the first chord of No One Loves Me Better out on Red Parlor Records out on April 5, 2019. This esteemed independent label has long been a champion of music’s best songwriters, and Dwight is no exception. This new collection of songs is some of his most personal yet– gut-wrenching, and heartbreaking to date. The story of a man finding love, committing a crime and wanting redemption runs deep in Shane’s songs.

From the heartwarming “No One Loves Me Better” to the dark “Bullets & Gasoline” to the sassy “Sucker,” Shane nails life to the wall like a wanted sign out in the wild west. Shane’s songwriting has evolved so far that he may be untouchable for a while, and fans won’t be able to get it out of their heads, critics won’t know what to do with him. But one thing’s for sure; he’s here to stay.

Recorded at Grammy Award-winning Kevin McKendree’s studio in Franklin, TN with a mega all-star cast of players the sounds of this album, are slick, powerful and groove driven. The heartbeat of the drums and the entanglement of guitars mix well with Shane’s raspy voice. The eccentric guitar tunings bring the haunted voices to life; you can almost see the movie. “You will hear some of my friends, Bekka Bramlett (Elton John), Kenneth Blevins (John Hiatt), and Rob McNelley (Bob Seger) who all came to the table that day to be a part of this story. The story is of a misunderstood man, his trials and tribulations over the perils of whiskey, women, and the music business.” – Shane Dwight

No One Loves Me Better, ends with “The Trial Of A Poet” – a haunting resonator and background vocals from the renowned Bekka Bramlett; it’s filled with fog, crunchy leaves, and a flashlight. There are blues, rock, soul, country and a little bit of hip-hop that shows his California roots. It’s heavy, it’s deep, and it’s a swamp full of characters that show up at the fight.

Shane grew up on a ranch in Morgan Hill, CA a few hours from San Jose and Monterey, where the air was fresh, and the sun was hot. At the age of nine, he was diagnosed with Perthes bone disease in his hips that prohibited from walking for about a year a young boy. Since then, the debilitating illness does go into temporary remission but when it returns it forces Shane to live with severe chronic pain. Shane began to learn how to play guitar back in high school, playing with friends and bands along the way, he started The Shane Dwight Blues Band at 28. His musical roots were FM radio, Album Oriented Rock artists like Led Zeppelin, The Rolling Stones, and Stevie Ray Vaughan. He dug deep into their influences and found a stack of others, Muddy Waters, John Lee Hooker, and Albert King; those gave him the nod to take it even further.

Sometimes standing on the rock where Moses stood is vital to get the energy of the ground into your soul and when Shane stood on the same burn spot where Jim Hendrix once stood at the famed Monterey Blues Festival, he felt the mysterious aura seep into his bones. Bones that once were strong get weakened at times when you need to fill your cup

Where do you go to get it filled up? At the well of course, and for Shane that well is his fans. He has crisscrossed this country and the world many a time, to bring the people what they want, his music – a blend of rock and blues with a little dash of country. His band went on to win the Monterey Blues Festival Battle of the Bands in 2001, and that’s when it began.

He caught fire that day in Monterey, and never stopped except to get gas. His grassroots approach to his career has also been crucial for he has built it fan by fan, show by show and album by album. From What You Need to Gimme Back My Money to A Hundred White Lies, Shane has conquered it all; festivals, CD sales, radio and press accolades galore from rock to country to blues and back again. Dwight’s most successful to date has been A Hundred White Lies, which received praise from publications like, USA Today, Guitar World, and Living Blues Magazine. It charted on several popular radio lists, XM/Sirius Satellite’s Channel, “Bluesville,” Living Blues Magazine, Route 66 – an Americana radio show chart for a total of about six months together. Then, in Spring 2018 he went into Greaseland Studios with Kid Anderson and did a fresh set of his favorite blues covers with another all-star cast of players, called High Time I Got Mine which is only sold at his live shows.

Shane’s hectic touring schedule reads like an airplane flight path. He keeps it real with a bi-coastal routing to festivals, winery series and of course, he will show up his favorite dive bar to croon. He has performed over 3500 shows over the past 20 years, headlining at some of music’s most signifcant events; Beale Street Festival, Portland Waterfront, Reno Blues Festival, Legendary Rhythm and Blues Cruise, Ottawa Blues Fest; sharing the stage with household names such as Blake Shelton, The Doobie Brothers and B.B. King. He’s backed off the 200 dates a year he once did, but he still brings the rock to the table and the blues to the dance floor.

Country and blues music is about the same, you see, they are rooted from the same soil with a Bible and bottle in each hand. And that’s why Guitar World said that Shane Dwight, “rocks hard.”

Uncategorized
Check out the calendar for On The Bayou Productions!
Animation Mag Runs With Tim Grimm’s “GONNA BE GREAT”