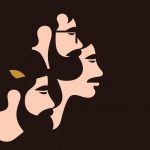 WITH THEIR AMERICANA DEBUT ALBUM

The trio combine their talents for a slow-cooked, laid-back album that recalls an early American Songbook for modern times

From Knoxville to Nashville via Hertfordshire, U.K., Martin Harley, Daniel Kimbro & Sam Lewis will release their self-titled acoustic Americana debut on February 22, 2022. Produced at Wow & Flutter Studios, East Nashville, TN the old-fashioned way – writing songs in the morning and rolling the tape in the afternoon – the album highlights Daniel’s Appalachia roots, Sam’s Nashville tones, and Martin’s traveling riverside blues. Individually they have worked with some of the biggest names in the business.

“This collaboration is both the tight rope and the safety net. Working with Sam and Daniel is based on mutual trust. The album never really had a mold into which it needed to fit; therefore, it’s been a safe home for new and exciting ideas. If the commercial success of an album directly related to how much fun it was to make, we’d all be retiring to the Caribbean next year.” – Martin Harley

Martin Harley has been making music and touring the world for over two decades. Exploring blues and roots in a style The Guardian (UK) referred to as “Spellbinding,” Harley has released eight albums to date. His carbon-neutral Blues Gone Green bicycle tour of the U.K. took place in 2011. He participated in the World’s Highest Gig in the Himalayas. His motorcycle adventures have taken him across Mali in search of the roots of blues music. Two highlights are he toured Northern India and Nepal on a vintage Royal Enfield motorcycle and then spent a year living in Australia inside his 1977 Holden station wagon. Martin is up for a few Americana Music Association-UK awards, including Instrumentalist of the Year, Best Acoustic Guitarist, and Best Acoustic Blues artist.

Raised on American Roots music in and around Appalachia, Daniel Kimbro is a Grammy-nominated musician from Knoxville, TN, with numerous recording credits and touring appearances. Splitting his time between Knoxville and Nashville, Daniel is currently touring with John Hiatt, the Jerry Douglas Band, the Earls of Leicester, and the Transatlantic Sessions. He has appeared on stage with James Taylor, Alison Krauss, Sir Aly Bain, Cara Dillon, R.B. Morris, Molly Tuttle, Maura O’Connell, and many others.

“I keep finding myself in situations with Martin and Sam where our ideas rarely gestate into any presentation resembling our initial concepts. I think that’s a very good thing. I don’t have to guard myself with Martin and Sam. It’s been that way since I met each of them. I just throw ideas out, and for some reason, my ego doesn’t rear its fragile head and tell me that it’s too soon or that those efforts are not good enough. I’m a frequent victim of paralysis by analysis, but they somehow diffuse my brain-bombs and let me throw words and notes around without fear of pretense.

I found the beginnings of the song ideas I brought to the trio by myself, usually in the back of vans and airplanes or on long walks in a new city. But the best work happened sitting in Sam’s living room or on his back porch in East Nashville, passing ideas back and forth. We disassembled and reassembled our initial chords and words, then rearranged again until it was what we wanted. There was very little time that passed between those morning and evening efforts at Sam’s house before we found ourselves in the studio recording them during the afternoons. I reckon that’s why this record still sounds fresh to me despite the many times I’ve heard or sung some of these songs.” – Daniel Kimbro

“The easy groove, and warm, effortless, gravel-edged voice reel you in from the very start… he (Sam) sounds from another time, or timeless.” – Mojo (U.K.)

Nashville-based singer-songwriter Sam Lewis has collaborated with Leon Russell to Chris Stapleton, who dubbed him “a modern Townes Van Zandt.” Lewis is often labeled with the word “soulful” and a style that meets at a juncture of many different genres, a place where feel-good music meets vital social commentary. A decade worth of touring his studio efforts (mostly solo) has captivated audiences worldwide. His songs and stories are glued together with a unique stage banter developed from performing in numerous music halls, clubs, theatres, festivals, and music cruises.

“These are a special batch of songs we believe we couldn’t have penned and recorded independently – they required all three of us to create them together. We chose to shelve any preciousness or ego and simply wrote what made us smile or even laugh at times. If either of us expressed any type of competition, it was all performance-based in hopes of impressing each other and encouraging each other to reach further and dig a little deeper. We truly believe anyone who listens with their heart and soul can feel the sincerity of our intentions.” – Sam Lewis

Over the past few months, they have been releasing singles along the way with “Man Get Ahold Of Yourself,” “Neighbors,” and “Cowboys In Hawaii” with videos to match. This album is sure to be one of the year’s best, with songs about neighbors, guitars in Hawaiian tunings, and settling nerves while walking with a hangover. With the album ready to go, a U.K. tour booked in the Spring, and some stateside shows soon after, these three fine musicians are just what 2022 needs: good friends, great songs, and strong coffee.

Uncategorized
Serabee Wishes Fans A Joyful Holiday Season! Album Out In 2022
Cool soundtrack for your road trips, porch hangs, and when loves gets thrown on the rocks