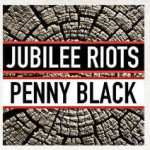 Debuted at #9 on US Billboard Heatseekers Chart

Atlanta, GA – Northern Roots act Jubilee Riots is a band that is very much centered around telling stories that resonate with truth and authenticity, as is evidenced by their latest outing, Penny Black. Inspired by years of touring, meeting people and sharing stories over late night drinks at the bar with fans, the band put out the call for people around the world to submit their stories as inspiration for their upcoming album. Letters came from across the globe – from the band’s native Canada to locales as faraway as Japan and Australia – each carrying the weight of one fan’s emotional tale.

“There were all sorts of letters,” shares bass player, Mark Abraham. “Some were dark and anonymous and difficult to read but many were funny or embarrassing; the kind of life events that happen to all of us.” Bandmate Brian Buchanan adds, “It’s really humbling, but it’s also amazing to remember that all of those anonymous faces in the crowd – every single one of them – has a battle that they’re fighting and their own secret histories. All it takes sometimes is being an ear for people to talk to.” “There were a lot of common themes,” vocalist and songwriter Trevor Lewington shares. “You start to see that not only does everyone have their own stories but there are some common themes that run through all of our lives and sometimes those similarities can actually connect people who wouldn’t have guessed they had anything in common.”

Beyond the challenge of taking 500 letters and turning them into an album of songs, the band had another vision: to create a collection of tracks that they could perform start to finish on a late night dance tent stage at festivals; an album with an energetic pulse that would be impossible to sit still and listen to. It was that juxtaposition of upbeat party grooves with meaningful lyrics based on very personal stories that became the focus of the project.

In May, 2014, the band headed to a rustic studio in Portland, Maine, to record with producer Jonathan Wyman. Renting a cottage nearby afforded the band the opportunity to relax nightly and watch the hockey playoffs, sample local beer, and tweak arrangements around an old upright piano. “Man, that thing was out of tune,” laughs drummer, Bruce McCarthy, “but I think sometimes a song needs that kind of character to come to life.” After a month at the studio, the band had recorded a set of new songs. Some drew from specific stories: “Astray” was based on a letter about a Russian Jew who escaped the Death March and thought his family had been killed, only to find out 50 years later they had survived and lived full lives. Others drew on the common threads winding through the stories: meeting a significant other (“Cut The Lights”); challenging relationships “Unsteady,” “Trying Times”); and the potential risk and reward of making bold life choices (“Two Bare Hands,” “Traveler”). Making bold choices is something the band can relate to, as they recently made the decision to change their name.

“We toured and recorded as Enter The Haggis for a long time but that name no longer represented the music that we’re making,” says the band’s multi-instrumentalist, Craig Downie, who plays everything from trumpet to bagpipes. Over the years the band has meticulously crafted their sound, transforming their original Celtic-jam into something diverse and multifaceted; something uniquely their own. The name Jubilee Riots was chosen, paying homage to their hometown, Toronto. “We’re lucky enough to have had the luxury of growing up as a band,” Buchanan offers. “We were given the time to make mistakes and to develop, which a lot of artists don’t get anymore, but at the same time it meant that we developed a lot of personal relationships. I think there were 400 backers in that first crowd-funded project and when we were addressing the envelopes, it was amazing to us that we could put a face to just about every name that came in; people we’d met over the years. They’ve stuck with us through all the bumps and bruises.”

As Enter The Haggis, the band released seven studio albums and toured internationally, landing high profile gigs on “Live with Regis and Kelly” and A&E’s “Breakfast with the Arts,” as well as being the feature of a concert/documentary on PBS. With a new album and new name the band hopes to build on this legacy and has an extensive tour lined up taking them through Canada, the US and to Europe.

The band recently gave artistic carte blanche to UK-based visual artist, Steve Smith, to create a video for the song; “Trying Times”. “We found some of Steve’s work online and loved the darkly comical characters,” says Lewington. “We knew right away that his visual aesthetic would be a perfect fit for the song because it’s upbeat but with a serious lyric.” Steve’s process is to render by hand, giving the character and scenes a truly artistic quality. In the “Trying Times” video, Steve plays with the idea of mock panic as the characters deal with an inevitable apocalypse. Satire is built by making the setting a theatrical musical, whereby the audience in the video looks uncertain as to whether there is a true emergency or if it’s all part of the show. Jubilee Riots doesn’t often hand over artistic license to an outsider but were thrilled with the final product. “It’s fantastic and unlike anything we’ve ever done before,” says McCarthy. “I think it will be fun for a lot of our fans to see, as about twenty of them joined us in the studio during the album recording to sing the gang vocals and lay down the hand-claps. The chorus and audience characters in the video are singing and clapping to what our fans did in the studio.” “I don’t think many fans get to see a portrayal of themselves in a band’s video,” says Lewington. “Not that the animated characters look anything like our fans.”

To listen to a streaming link of Penny Black click here: http://www.jubileeriots.com/bio-press

Uncategorized
Wallflower, Wallflower – won’t you DANCE! with me!
….kill ’em with kindness…