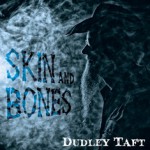 Dudley Taft Rips Into You With Skin And Bones

“… making paint peel from the walls with the heat of his guitar blitzkrieg…” – Deep RootsAtlanta GA – American Blues Artist Group recording artist Dudley Taft brings his own version of the blues to the table with Skin And Bones, a hair-raising collection of blues, rock and a slice of grunge pie to be served on October 16, 2015. Recorded at Muchmore studio in his home in Cincinnati and Omni Sound in Nashville he and bassist John Kessler co-produced the record.

Skin And Bones came from three sessions with Jason Patterson on drums and John Kessler on bass at Taft’s home studio once owned by legendary rock icon Peter Frampton in Cincinnati, OH. Yes, that guy. Taft bought the house with the intent of utilizing the studio full time.  He didn’t know the support phone number when setting up the room would lead him to Frampton himself. Taking cues from Neil Young and his studio approach of using the first takes, Dudley gives Skin And Bones a raw feel with fresh air weaving in and out of the arrangements. Never mind the blemishes, let the soul of the songs shine through.

As the creeping chord progression starts the CD with the title track, “Skin And Bones”, Dudley sings about Bourbon Street in New Orleans. You can almost feel the hot pavement under your shoes as you walk through the Crescent City. He gives nods to the past musicians, the voodoo, and its patina history.

“Fuzzy Dice” is a musical air raid that started out as a riff using the Buzzmaster Fuzz Pedal and then researching the rearview mirror classic to get inspired to write the lyrics. Fuzzy dice were hung in B-17 cockpits showing 7 for good luck as the fighters carried out their missions. The heavy driving guitars and being honest with the subject matter makes this a standout. You can almost feel the plane soar and dive and shoot.

“Coming Home” is a simple yet expressive reflection of what matters in life. As we all know, life pulls us in 25 different directions, and we get lost; sometimes the home front is where we belong. Built off a classic 50’s fingerpicked riff, Dudley uses his bare knuckles to emulate Lightnin’ Hopkins and Hubert Sumlin. Another nod to a guitar hero of Taft’s is the straight forward, “Leland Mississippi Blues” from Johnny Winter. Never mess with a classic. “The descending riff is totally cool and fun to play. It’s one of my favorite songs to perform live,” Dudley states.

“I like blues because it touches on dark and heavy things. I’ve always believed that it’s important to have old and new influences.“ – Dudley told Premier Guitar in 2013.

If you listen close, his influences range from Johnny Winter, Elmore James and ZZ Top to Alice Chains’ Jerry Cantrell. A gear head geek at heart he uses all the tools in his shed to create his sound. His relationship with Reese Wynans of the legendary Stevie Ray Vaughan band continues as he supplies the hum with his signature organ sounds. The backing vocals of Rachel Williams and Ashley Christensen add a sweetness to the choruses.

Dudley’s music career began in high school when he founded the band Space Antelope with friend Trey Anastasio (of Phish). In the 1990’s he joined Seattle band Sweet Water, touring the states with Monster Magnet,  Flaming Lips, Candlebox, and Alice in Chains. After recording two albums for Atlantic, he left the band to join Second Coming. More touring followed with an album on Capitol Records and a taste of success thanks to the single “Vintage Eyes” which made it to #10 on the Rock Radio charts.

In his music, you’ll hear Delta roots mingling with Seattle grunge, a southern twang with a high-octane crunch. Dudley’s music is a visual film that comes to life with his dark look and respect to the music itself. He honors the players that came before him and those around him but is always looking down the road into the future.

Dudley will be playing Seattle and Midwest cities throughout the fall in the U.S. and will return to Europe for festivals and club gigs in the summer. Look for that upcoming information on his website www.dudleytaft.com

For all his publicity needs, please contact Jill Kettle at Miss Jill PR – tel: 404-213-8542 and Jill@missjillpr.com

Uncategorized
The Voice Of The Wetlands 2015 Festival Is On!
slow down and pay attention in order to rumble slowly…