It’s gonna be a hot one… 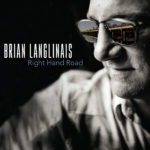 Langlinais Takes The Wheel And Shifts It Into High Gear

Album filled many flavors of his genealogy – a pot of Louisiana, a dash of rock, and several heaping helpings of soul

CD out On September 16

You could say Brian Langlinais’ new recording, Right Hand Road, was birthed by an ice storm, but that would be getting ahead of the story

Long before that weather event, the album’s roots ran from sea to sea along I-10, home to a slew of bars and nightclubs where bands earn gas money between major cities. For decades, these venues have fostered the uniquely American art form called roadhouse music: a big tent under which blues, country, zydeco, and even jazz come together—often in the same band. Roadhouse legends such as Delbert McClinton, Marcia Ball, Omar and the Howlers, Mason Ruffner, and Lee Roy Parnell all came through Langlinais’ hometown of Lafayette, Louisiana, where he cut his teeth in bands playing this crowd-pleasing music.

“Back then, the job was—and still is—to make people drink and be happy,” explains Langlinais. “It was about playing songs people know. I covered Wilson Pickett’s catalog, which led me to a lot of lesser-known Stax artists like William Bell. I ended up in blues bands with horns, groups that became more soul than Mississippi Delta blues.”

Horns loom large in Langlinais’ history. His father played saxophone with Swamp Pop legends The Shondells, and Brian double-majored in college in trumpet and vocal performance. Ultimately, it was the singer that won out. Langlinais eventually landed in Nashville, where he strayed from his roadhouse roots long enough to record two acclaimed Americana records: Rock & Fire and Tonight I Might. But with Right Hand Road, those roots have called him back.

Langlinais had been considering returning to Lafayette to record, when his friend, producer/guitarist D.L. Duncan asked him to go there for a day and cut some tracks with Grammy-winning engineer Tony Daigle (Derek Trucks, James McMurtry, Jon Cleary). They would just lay down a couple of covers, and see if they liked working together. Brought along from Nashville were a bassist, Ron Eoff (Cate Brothers, Jo-El Sonnier, Levon Helm) and a keyboard player, Patterson Barrett (Gurf Morlix, Buddy Miller), with drummer Brian Brignac (Sonny Landreth), picked up in Lafayette.

“We weren’t sure it would turn into a record” Langlinais recalls. “It was just to see how much fun we could have. We were planning on going back to Tennessee the next day, but there was an ice storm in Nashville. None of us could get back, so we ended up tracking for three full days.”

In addition to the stellar quality of the playing and singing, what distinguishes the resulting Right Hand Road is its level of songwriting. The tunes tell timeless stories while adding new twists. William Bell’s classic “Every Day Is a Holiday” has been covered by everyone from Warren Haynes to RZA, but few since Bell himself have brought the well of authentic Southern soul feeling Langlinais and company evidence here.

“Wilson Pickett’s ‘Green Grass’ has become a Zydeco standard, but not like we did it,” says Langlinais. “Brian and Tony came up with a groove that went in a different direction, and Ron did a tic-tack thing on bass that made us feel this could be the beginning of a great record.”

Though the singer had more covers in his iTunes library, producer D.L. Duncan felt they should write some tunes of their own. “D.L. had some scratch lyrics for a couple of songs,” says Langlinais. “We would come up with a groove, take a little break, D.L. would come back with a lyric that he thought would fit, and I would start singing it. We wrote ‘Louisiana Love,’ ‘My One Desire,’ and the two acoustic songs, ‘Right Hand Road’ and ‘Our Love Is Slippin’ Away,’ in the studio while we were tracking.” Their work sits comfortably next to the covers, displaying the same simplicity mixed with an emotional depth that makes this kind of music so enduring.

“…his blues have redemption, and his vocals reveal an approachable spiritual lightness rather than dwell in bitter self-pity.” – Music News Nashville

Back in Nashville, Langlinais and Duncan decided they needed two more songs to round out the record, so “Tucumcari Tonight” and “You Can’t Say I Didn’t Love You” were recorded at the Dog House with Lynn Williams (Delbert McClinton, Marcia Ball) on drums, Steve Conn (Sonny Landreth, Keith Urban) on keys, James Pennebaker (Delbert McClinton, Lee Roy Parnell) on guitar, and Eoff on bass.

“To me, the record symbolizes getting to go back home,” Langlinais says. “If you are from New York and say, ‘I need a sandwich from Katz’s Deli,’ people from New York can taste that sandwich. Likewise, if you’re from Lafayette, and I say, ‘I’m hungry for an Old Tyme Grocery po’ boy,’ you know the flavor. Going back to Lafayette meant working with people who have the same set of references. I have worked with people who can play a second line groove, but with these musicians, it was so much easier to express the minutiae that make a groove specific.”

It is this kind of attention to detail that renders Right Hand Road special. You don’t have to be a music scholar or musician to feel in your heart and bones how getting the specifics right adds to the music’s impact. This recording could only have come from someone with Louisiana music in his DNA.

“I was born and raised there, and my family was one of the first families to get land grants there,” says Langlinais. “My bloodline is only Acadian and French. Going home to Lafayette and doing the music that I’m about was a full circle.”

Brian is booked by Rodney Metoyer of The Metoyer Outfit and will have dates to follow.