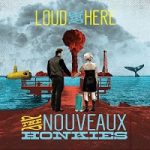 Turn It Up For Their New Album, Loud In Here

Out on March 2nd

Just as Chris Smith and Charles McCarron wrote in their 1916 hit song “Down In Honky Tonk Town,” “It’s underneath the ground, where all the fun is found,” The Nouveaux Honkies are right in the thick of it.

Honky Tonk Country is a sophisticated art form. It’s simple in the message but not in melodic chords; a lot of masters of music can’t play the intricate melodies and English professors can’t pass the “no mores” or “no goods” and the word ain’t. Its ragtime roots are based on jazz and blues for feeling and The Appalachians for musical chops. The idea of honky tonk was to be down to earth, gritty and directly speak to the blue-collar folk after a long day of work. Cheap beer, dancing and sometimes located in the red-light districts of towns across the country these places were hopping on any given Friday night.

Hank Williams, Sr. to Loretta Lynn back to Billy Joe Shaver and Willie Nelson, a lot of them were living the same lives as the bar patrons.  Sometimes it saved them, and sometimes it killed them.

In this place where some folks come together

In this place where some folks fall apart

In this place where we come out of the weather

In this place we can make a new start.  – In This Place

With the opening chords, of Loud In Here, The Nouveaux Honkies strike that very emotion that is in Honky Tonk with a modern twist. It’s a collection of love songs, hate songs, and a cover of the classic, “Wichita Lineman.” It’s also a charming vignette, for the married duo bring their life of burnt dinners and cold coffee from their RV to the stage. This vagabond couple lives in an RV – most of the time.

Well, that’s how the legend goes…

In mid-2014, Rebecca Dawkins and Tim O’Donnell, of The Nouveaux Honkies, hoisted anchor and set sail in their rebuilt RV.  The journey started in South Florida and took them as far west as the Rockies, as far north as the Great Lakes, as far east as Cape Cod, and returned south for the winter. It’s been somewhere around 150 thousand miles, 600 shows, and at least one million smiles that have influenced The Nouveaux Honkies and their latest recording, Loud in Here, which will be released March 2, 2018.

I didn’t ask for this; I just can’t see around the corner

but somethings gotta die to make room for something born.  – Loud In Here

In this new collection, the couple nod to the greats and by creating their gumbo they reveal from a long stretch of highway influences, what makes them happy. Fans love their authenticity and critics adore their charm.

“If Johnny Cash and Freddy King had a baby it would be the Nouveaux Honkies,” – The Sun-Sentinel (FL)

Loud In Here is their third full-length release and their second album recorded at The Zone in the Hill Country of Dripping Springs, Texas. It’s a culmination of the bonds they have made across the country with the community and the land. This album features special guests: Bill Kirchen, Ephraim Owens, Nate Rowe, Chris Gage, Lloyd Maines, Pat Manske and Tim Buppert.

Tim O’Donnell says, “We arranged this record in the studio. We wrote most of the stuff a few weeks earlier when we were in Nashville and working with all these dudes was just awesome. It was super relaxed and just plain fun.”

The record spans a full emotional gauntlet, and Rebecca Dawkins’ fiddling has expanded into a fantastic singing presence. From humor and quirky duets like Will and Faith, Big Heart, Hard Head and their version of The Reason Our Kids Are Ugly they tell the story that their love for each other is true and sincere. The innovative ballads like “The Glades,” “Loud In Here” and “Heart Can’t Live Here” are tough and tender moments of reflection. From the cover of the timeless classic, “Wichita Lineman,” to pumping rockers like “Today Won’t Be Easy” and “Playing Cards With Myself,” this new record is a musical rollercoaster.

“We were Matt “Guitar” Murphy’s band for a few years and played many blues festivals in the U.S. and most notably, The Blue Note in NYC,” Rebecca remembers. They also opened for Charlie Daniels, John Anderson, Band of Heathens, Devon Allman, Styx, Edwin McCain, Asleep at the Wheel – “name the genre we’ve played the stage!” Tim hollers.

Tim has always been a Kirchen fan, and a dream came to true to open up for the legendary player in New York, “Bill was a gem.  Not only the badass picker I heard on records but also a genuinely beautiful human. He told us to look him up when we got to Austin.”

So, without a flinch, while the duo was working on the record in Austin, they saw him at El Mercado and asked if he wanted to do some picking on a track. As musicians know word travels fast about fellow players so as soon as the Kirchen window opened the doors swung wide – Ephraim Owens a great horn player, Nate Rowe and Redd Volkaert (Tim is his biggest fan).  Through festivals, shows and word of mouth, The Nouveaux Honkies were a musical magnet.

“…put on a blistering show with a fresh approach but authentic sound that is truly their own.” – Jambase

Ray Kennedy at Zen Masters mastered the album giving it that noticeable sheen of his, and Tanya Shaw Jeffrey from Ginseng Creative in Colorado at the drawing board for the artwork depicts the vagabond couple as they are.

2018 sees the duo with a permanent residence in Knoxville, TN a place that O’Donnell says was love at first sight, “We based out of Tennessee the last two summers and fell in love with the Smokies. Knoxville will be a wonderful hub for traveling, and we also love this little city.”

The Nouveaux Honkies look forward to the new release and performing for the folks that afforded them the life they love. Check out their website for more info on dates: https://tnhband.com

Uncategorized
MARK HUFF’S STARS FOR EYES BREATHES REAL LIFE INTO TALES
A little shuffle here, with a cry, moan and groan on the side…