Girls Rock Out Too… 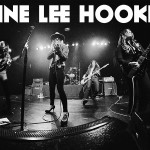 OUT ON THE ROAD NOW:  JANE LEE HOOKER

A band of five women from New York City

that mash up the grit and attitude of their hometown and hold nothing back
“Blistering. Sweaty. Raw…” Explore Brooklyn

Ruf Records recording group, Jane Lee Hooker drives the van at 100mph with their music. You can’t call them girls; you call them chicks. They are by no means new to the game. So with the sun setting behind them they hit the road with festivals, clubs and opening slots for some cool fellow musicians.

All while putting on their makeup. Amazing huh?

On April 15th they will release No B! a record filled with blues and rock covers as well as originals that stick like glue with grinding guitars backed by a pounding drum beat. Produced and recorded by Matt Chiaravalle at Mission Sound, Brooklyn, NY and Mercy Sound, NYC, it’s bound to shove new life into their fans.

Grit and grime with smeared lipstick is what’s all about with Jane Lee Hooker.

Who are these chicks?

Between the five members, they have decades of experience playing, recording, and touring both nationally and internationally. Individually, the members have performed for thousands of fans while sharing bills with the likes of Motörhead, MC5, Lynyrd Skynyrd, and Deep Purple.

Guitarists Hightop and T-Bone honed their love of blazing dual leads in Helldorado in the ’90s. From there, Hightop joined Nashville Pussy, T-Bone joined Bad Wizard, and both women toured the world. But when their time with those bands ended, they realized they missed the rush of trading guitar solos with one another, leaving audiences howling with joy.

They quickly recruited Hail Mary, who played bass with Hightop in the punk band the Wives. Cool Whip sat behind the drum kit and got the nod before she even finished slamming out the first song of her audition. And no singer in the entire city can bring a crowd to its knees harder or faster than Dana “Danger” Athens.

With double lead guitars, a heavy rhythm section, and soul-scouring vocals, JLH honors the likes of Muddy Waters, Howlin’ Wolf, Johnny Winter, Big Mama Thornton, and other blues greats. They have either shared the stage, stormed the stage or set the stage all around the world. These chicks are sassy and brassy so they match up with only those who can run with them.

What has the press said?
“These women do more than just pay tribute to [John Lee] Hooker. JLH takes everything they’ve learned about him and other blues legends as Muddy Waters, ‘Big Mama’ Thornton, and Johnny Winter, then they mix in elements of punk and classic rock to give them such a distinct, hard-edged sound.”   – Guitar Girl Magazine

“There was no shortage of over-qualified female musicians at MEOWCon…Black-clad New York blues revivalists Jane Lee Hooker ripped the balls out of Muddy Waters’s Mannish Boy.” – Evelyn McDonnell, Populism
“Blistering. Sweaty. Raw. Kinda like sex on a steamy southern night… captures the nostalgic feeling of classic blues-rock, a ballsy punch in the face…This all-female ensemble of virtuosos knows when to step out of the pocket to balance the explosive driving force of Dana Danger Athens’ vocals.” – Tom Tom Magazine

“Jane Lee Hooker does its semi-namesake John Lee Hooker proud with their aggressive, hard rock interpretation of blues of all kinds. The five women of the band bring the emotion of the blues alive…” – Explore Brooklyn