DWIGHT TWILLEY – THE BEST OF

“… passionately yelled vocals that convey the ceaseless thrill of feeling the freedom that remains the great promise of this kind of rock ‘n’ roll.” – NPR

DWIGHT TWILLEY DELIVERS ONLY WHAT HE KNOWS – HIS BEST 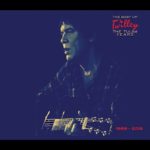 “…Twilley still possesses the chops that can all but assure a stirring sing-along.” – BLURT

“… an equal mixture of Beatles-like pop and Sun-studios rockabilly elements, forming a hybrid few had ever explored then or since.”  – Rock And Roll Report

“…first rate power pop every bit as satisfying as Badfinger and Big Star at their best, and anyone with a yen for a smart hook will revel in this.” –  Allmusic.com

This is a collection of the best songs from iconic pop rocker Dwight Twilley recorded since returning to his hometown Tulsa. The tracks were cherry picked from the unexplainable string of rock solid albums released worldwide from 1999-2016. Remembered for hits “I’m on Fire” & “Girls” in the 70’s & 80’s, Twilley has been far from idle. It’s extremely rare for an artist who emerged in 1975 to release a 40 song double CD including 7 bonus tracks in 2016. This is exactly what Twilley has done.

Dwight’s music has been featured in movies like Wayne’s World, Diary Of A Teenage Girl, You’re Next, and the Netflix hit series, House Of Cards.

His fans are ecstatic perhaps you should find out why.

Uncategorized
AMA Or Bust – 2016 – Miss Jill PR – Goes Twerking?
Time to get the jalopy ready to head to Folk Alliance 2017