Dana Fuchs Take The Show On The Road! 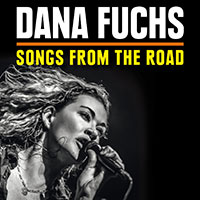 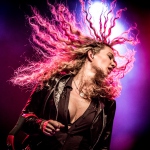 From Europe to Conquer The U.S.!

“To look at, Fuchs is willowy flower-fairy with a head of Titian curls…Her voice, though is juke-joint dirty and illicit, evoking Joplin, Jagger, and a fag butt bobbing in a glass of bourbon.” – Classic Rock UK

Atlanta, GA – Ruf Records recording artist Dana Fuchs has become a powerhouse vocal sensation in Europe with her Robert Plant meets Janis Joplin vocals, along with a Mick Jagger stage-like swagger, her songs and lyrics come straight from the depths of her tortured yet joyous soul to her audiences. Fuchs is now set to conquer the U.S, as she continues her World Tour in support of her latest release Songs From The Road with a string of key US dates in 2015.

You have to see Dana live to believe it and she has just delivered her fierce live show to her fans’ living rooms with her new live CD/DVD combo, captured at Highline Ballroom in New York City on March 14th 2014 in front of a sold-out, hometown crowd. The reviews have been stellar.

“It’s the voice that grabs you first. That big, whiskey-flavored tonsil showdown that can kick your butt one minute and soothe your ills the next. Once she has caught your attention, Dana Fuchs will proceed to give you a piece of her heart with her arsenal of songs that were built from feelings, experiences, some good times, some bad times and a lot of soul searching in a world that can be loving and cruel. Fuchs definitely knows her way around a totem pole of emotions.” – Glide Magazine

Songs From The Road is jam-packed with material spanning the years since Dana left her home in Florida at age 19 to pursue her music career full time and pay her dues in NYC. Dana took NYC’s gritty blues scene by storm garnering attention that led to her first big break under the bright lights of Broadway playing Janis Joplin in the critically acclaimed Love, Janis. Her role got the attention of world-renowned film and stage director Julie Taymor, who cast Dana to star as Sadie (a part written specifically for Dana by the director) in the 2007 Academy Award nominated Sony Pictures Beatles musical, Across The Universe.

In 2009, Dana Fuchs cemented herself as a world-class singer & songwriter with the release of her second critically acclaimed studio album Love To Beg on Ruf Records described by Relix Magazine as a “must buy.”   Proving she had staying power, her third studio album Bliss Avenue (Ruf Records 2011) was hailed by critics with Classic Rock Magazine UK describing her “ash tray battle cry” as getting its “best canvas to date.”

Dana’s life story is not one for the faint of heart. Arriving in NYC alone and broke, clawing her way out of poverty, addiction, the seedy life of strip joints and enduring the tragic suicide of her sister, gave Dana the will to purge her soul through music and invite her audiences to share and bare their souls with her. Dana says, “Each show is about my connection to the audience. They are half of the show and a huge part of the whole experience.  We all share the same desire for joy and we have lived our own pain. My goal at every show is to make sure we connect and celebrate life in all its beautiful, painful glory.”

Now Dana takes Songs From The Road on tour in the U.S.A. where audiences will get a supercharged two hour show as Fuchs exhibits “blisteringly raw vocals” and “gut-wrenching honesty” to forge a true “emotional connection” with them according to Blues & Soul Magazine UK.

Dana is booked by Intrepid Artists out of Charlotte, NC and her radio is handled by Mike DeUrso with Ruf Records at the following email:  tunefulguy@hotmail.com