Alectro Writes On the Desk with a Duane Eddy pick 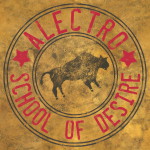 Alectro Writes on the Desks at the School of Desire:
A wildly, ill-mannered album
that would make Jim Thompson blush

Atlanta GA – BeBop Records aims to release the Alectro debut release School Desire on April 28th. A genre splitting sound that can only be done by its two members, Jeff Eyrich and Steve Kirkman. This album was produced at Kirkman’s studio called The Octagon located in upstate New York by the highly creative duo.

Jeff Eyrich and Steve Kirkman are the musical partners and soul brothers (in the soulful sense), who make up Alectro. They are music veterans from all facets of the industry; musician-producers, session men and fellow sidemen. Both share a passion for surf guitars, the spaghetti-western soundtracks of Ennio Morricone, Duane Eddy twang, old noisy amplifiers, tube distortion, weird-sounding strange looking guitars, off-brand EFX pedals, antique rhythm boxes, echo-plexes, all influences evident, and tools used in the music that they make. They are your ultimate uber-vintage gear heads.

Jeff and Steve met on various sideman gigs. “I knew Steve from the scene and dug how he played. We’d talk a little, usually me asking him about the cool guitars and amps he would bring to gigs. We started exchanging You Tube clips – he’d send me cool guitar-y stuff, I inundated him with obscure surf instrumentals – the sound I grew up on. One day Steve had me up to the Octagon to play some bass on a project he was producing. After the session he showed me one of his songs, we got to jammin’ and away we went – Alectro was born.”

After a few gigs and lots of sheddin’ out at the Octagon, Jeff and Steve got intense about recording under the name Alectro. The music flowed and School Of Desire is the result – a set of songs and music the duo wrote, composed, arranged, performs and sings. It’s got blistering suns, dark moods and twangy guitars scattered throughout.

What Steve says about Jeff:  “I think he’s very good at sizing up a song and knowing how to get it to its potential.”

Jeff Eyrich began his career as a Los Angeles studio musician and touring sideman. He has played bass and toured with Tim Buckley, Bette Midler, Tanya Tucker, Andy Kim, and Keith Carradine. His studio credits include Air Supply, Rick Springfield, Natalie Cole, John Cale, Joe Ely, Tanya Tucker and the Surf Punks. Jeff has produced more than 30 major label albums including Everywhere At Once by The Plimsouls, Hard Line by the Blasters, Proof Through the Night by T-Bone Burnett, Long Gone Dead by Rank & File and Get Outta My Room by Cheech & Chong. Most recently he has produced albums and played bass for Dave’s True Story and Lipbone Redding, both for BePop Records, an indie label he co-founded and manages.

What Jeff says about Steve: “I love the grit and reality in Steve’s lyrics, the depth, the simplicity, the stories he tells.”

Steve Kirkman is a sought-after guitarist, engineer, and producer. He has worked with many artists both live and in the studio. Steve’s childhood on a North Carolina farm was filled with the sounds of gospel, bluegrass, blues, country, and rock-n-roll. He made his way to the Hudson Valley with stops along the way in Nashville, Memphis, and New York City. A wordsmith at heart Kirkman spent some time in Nashville as a songwriter where he was romanced by the city’s underground music scene and decided that Music Row wasn’t for him. He eventually made a bee line for The Big Apple, New York City. There he formed the group Hope Machine who became a fan favorite with their clever covers of Woody Guthrie and Pete Seeger tunes.

Alectro is not what you think it is. It’s a spur kicking boot that aims for the gut and kicks up a lot of dust. Got your curiosity up? Go ahead give Alectro a listen – SoundCloud: http://tinyurl.com/pyqpvyp

May 1st, at the Towne Crier, Beacon NY – opening for Marshall Crenshaw.

Uncategorized
Hey I hear an echo!
Miss Fish is hell on heels with Wild Heart