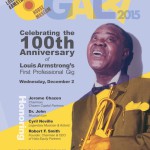 I wanted to send you a special announcement and possible invite to The Louis Armstrong House Museum Gala in December. Cyril Neville will receive the ‘Louie Award’ for his dedication to preserving and promoting the cultural legacy of Louis Armstrong.

“We are so excited for Cyril; he has been a long-standing voice in our culture to bring love and compassion for all of humanity to strive for peace. His deliverance of words and music as his chosen medium has set the bar high. He’s a part of a New Orleans legacy, a family of musicians and a single voice that is no other than Cyril’s alone. Congrats.” – Ruf Records

The Gala, which will include a special performance by Cyril Neville’s Royal Southern Brotherhood band, also will celebrate the 100th Anniversary of Louis Armstrong’s first professional gig, during which he played the cornet at Henry Ponce’s saloon in New Orleans.  Armstrong, who died in 1971 and was known as Satchmo, is widely recognized as a founding father of jazz.  He recorded hit songs for five decades, appeared in more than 30 motion pictures, and performed to sold-out concerts across the world. Despite wealth and fame, Armstrong settled in a working class neighborhood in Queens. His former home, perfectly preserved, is now the site of the museum celebrating his legacy.

“Each of our honorees enjoys a very special connection to Louis Armstrong and we are thrilled to honor them at the gala,” said Michael Cogswell, Executive Director of the Louis Armstrong House Museum. “The Museum is routinely visited by school groups, international tourists, domestic tourists, musicians, historic house buffs, and countless others.  Louis continues to inspire people everywhere, every day.  Just the mention of his name makes people smile.”

Dr. John is a six-time Grammy winning musician and Rock & Roll Hall of Fame inductee. His career began in the 1950s, where he worked with legends including Professor Longhair. Dr. John headed west in the 1960s as a session musician playing on records by Sonny and Cher, Van Morrison, Aretha Franklin and The Rolling Stones. During that time he launched his solo career as Dr. John the Night Tripper and recorded his breakthrough 1968 album “Gris-Gris.”

“Louis Armstrong was my hero and an ambassador to the world from New Orleans,” says Dr. John. “He opened the door for all of us. So getting the Louie Award from the Louis Armstrong House Museum on the 100th anniversary of his first gig is slammin’.”

A poet, musician, and artist, Cyril Neville has used music to define the problems of society while giving it a back beat and rhythm that people have been listening and dancing to all around the world for more than four decades. Born in late-’40s New Orleans as the youngest of the four siblings who would soon define that city’s R&B sound as The Neville Brothers, Cyril absorbed his parents’ vinyl collection and found his own voice when he turned professional at 19.

“As a drummer, I was attached to Satchmo’s use of rhythm in his playing and singing from the first time I heard him,” says Neville. “So, through the years, just as others like Ella Fitzgerald, Billie Holiday and Bing Crosby have been influenced by him, I’ve ’borrowed’ heavily from Satchmo in forming my own singing style. I feel that his style of singing is just as impressive and as expressive as his Trumpet style.”

“It is an extreme privilege to be honored by the Louis Armstrong House Museum and to honor Satchmo myself at this great event.  I’ve read that Jazz Music is the only true Art form contributed to the world by America. That means that Louis Armstrong is the Roux of the musical Gumbo that America is still serving to the world. Funkaliciously.”

Jerome A. Chazen is founder and chairman of Chazen Capital Partners, a private investment firm. He is also Chairman Emeritus of Liz Claiborne, Inc., and is one of the four founding partners who established the Company in 1976. He was largely responsible for the innovative sales, marketing, distribution and licensing programs that are an integral part of Liz Claiborne, Inc.’s success. He is a jazz enthusiast and serves on the Board of Trustees of the Louis Armstrong House Museum.

“When I was a freshman at the University of Wisconsin way back in the 40s, I first became exposed to Louis Armstrong and his 20s records of the Hot Five and Hot Seven,” recalls Chazen. “I was hooked then and to this day. I scoured second hand stores for 78s of Louis and his various groups. I even got to interview him when he brought his big band to Madison. He was a role model and never disappointed. He changed music in the 20th-century and will be forever remembered. We are all here to make sure that happens.”

Robert F. Smith is the founder, chairman & CEO, of Vista Equity Partners, the world’s #1 private equity firm based on its performance over the last 10 years, according to the HEC-Dow Jones ranking. Vista manages equity capital commitments of approximately $14 billion, has completed over 170 completed transactions representing over $45 billion in transaction value. Founded in 2000, Vista focuses exclusively on enterprise software, data and technology enabled solutions sectors. Born in Colorado to two parents with PhDs, Smith earned his B.S. in Chemical Engineering from Cornell University and his MBA from Columbia Business School, where he serves on its Board of Overseers. Smith is the Chairman of the Robert F. Kennedy Center for Justice & Human Rights, Member of the Cornell Engineering College Council, a Trustee of the Boys and Girls Clubs of San Francisco, and a Board Member of Carnegie Hall.

Of the Louis Armstrong House Museum, Smith notes, “Bing Crosby said Louis Armstrong ‘is the beginning and the end of music in America.’  I couldn’t agree more. Armstrong was a prodigious trumpeter, the pioneer of scat singing, and the world’s first great solo jazz performer. His appeal was universal — appealing to black and white at a time of deep discrimination in our society — and he had a voice that is as recognizable today as it was when he was with us. Louis Armstrong has inspired generations of performers from across the globe. The work of this museum will ensure Satchmo’s legacy endures for generations to come.”

The Louis Armstrong House Museum, the long-time home of Louis and Lucille Armstrong, is a National Historic Landmark and New York City Landmark in Corona, Queens.  Since its opening in 2003, more than 100,000 visitors from all over the world have been introduced to the wonderful world of Louis Armstrong. The Museum’s programs feature historic house tours, jazz concerts, and a wide variety of educational programs. The Museum owns and administers the largest research archives in the world for any jazz musician.

Thanks to the vision and funding of the Louis Armstrong Educational Foundation, the Louis Armstrong House Museum welcomes visitors, six days per week, 52 weeks per year.  The Louis Armstrong House Museum is a member of the American Alliance of Museums, Association of African American Museums, Museums Council of New York City, New York State Museums Association, National Trust for Historic Preservation, NYC & Co., and the Queens Tourism Council.  The museum is a cultural center of Queens College / CUNY and constituent of the Kupferberg Center for the Arts.