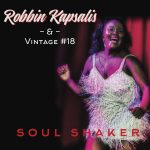 Robbin Kapsalis & Vintage#18 Slide On Over With New Album

Jabs from the heart, hooks from the mind – it’s a TKO for sure!

When Robbin Kapsalis struts on the stage with her white beaded dress and go-go boots, she smiles, shimmies, and sings to the crowd with conviction. The musical wrecking crew, Vintage#18, supports her with groovy guitar licks and a rhythm section solid as a rock. Her sultry voice sneaks up behind you and slaps you silly with their second album, Soul Shaker out on October 15, 2021, on her label Bird Song Records via CPI Distribution.

“Robbin is a whirlwind of soulful excitement backed by one of the tightest trios in the trade.” – Mark Wenner, The Nighthawks

The band spent this past winter and spring working on the album and quickly had it turned around to have something for their fans this Fall. Soul Shaker will be the remedy for those aching fans, for it is filled with blues, soul, and jazz sounds. The band wrote six original songs, also includes an original from Deb Ryder, and chose three covers, including two classics; “Shake It Baby” by Junior Wells and Buddy Guy and “The Cannonball” by Lil Ed and The Blues Imperials. Robbin picked the Chicago bluesman and their tunes to show off her roots and are live show favorites.

Robbin & Vintage#18 produced Soul Shaker at Gizmo Recording Studios in Silver Spring, MD, with Gantt Kushner engineering, which was exciting to have the whole band work in the process. They were elated to get back in there after months of COVID19 pandemic restrictions and lockdowns.

“The energy in the studio was high… the vibe was strong, as it should be, we’ve been playing together for eight years, and it was time to share our music once again. When the last note was played, we couldn’t stop smiling; my heart hurt. I felt so proud of us. I think we accomplished our goal for this album…bring that live energy we’re known for to each song…make ’em feel it” – Robbin Kapsalis

The core group members are Bill Holter on guitars, Alex Kuldell on drums, and Mark Chandler on bass, and with Robbin’s vocals, the four of them melt into each other, which sets them apart from their peers. A few guests were brought in for the horn parts that were arranged by their friend Ron Holloway, a legendary saxophone player (Warren Haynes, Gov’t Mule, Tedeschi Trucks, The Allman Brothers Band). These added some flavors and textures that help flesh out the songs. Their studio time served as a great getaway so they could close the door to the outside world and create their music.

“Robbin Kapsalis delivers vocals that slink through a smoky haze of Soul.” – The Alternate Root

Robbin was born in The Windy City before she moved to Atlanta, GA, “The Dirty South.” She was about 14 but recalls life in her song, “Silver Spoon,” where she sings about growing up making do with what she had. Growing up in Atlanta, Robbin briefly sang alto in the church choir, and while her family teased her for the low sultry voice, she didn’t let that get in the way of her dreams. Once you hear her, you can quickly tell her influences range from Sharon Jones to Koko Taylor to Tina Turner and Gladys Knight.

“PLAYED ON THE SOUTHSIDE TIL THE STREET LIGHTS SENT ME HOME

WE DIDN’T LIVE FANCY BABY, BUT HOW WOULD I HAVE KNOWN

AND THIS WAS MY WORLD I WAS BORN IN CHICAGO

NO SILVER SPOON IN MY MOUTH” – “Silver Spoon”

Soul Shaker will be a hard album to pick just one song to become your favorite, for they are all great, and D.J.s will leave it on shuffle. Vintage#18 lays a low, steady groove allowing Robbin’s vocals to breathe. A sparse “From The Heart Of The One” with just Robbin and Mark show off her expressive voice recalling Gladys Knight and Anita Baker as she begs for the lover to get out of her life. A Deb Ryder original “Living Large” recounts the trappings of being an entertainer and its ups and downs. A jump-jive “Boogaloo” song with an excellent saxophone solo from Ron Holloway will make the crowd jump. “You Don’t Deserve Me” is a song about a cheating man who will make you say, “You go, gurl…” as she sings about her broken heart – the band falls into a talking walking blues groove as she begins her tale pausing for her to slam the door.

OOO LOVER, WHERE CAN YOU BE

AIN’T NOTHIN OPEN BUT A BOTTLE OF GIN

“Vintage#18 is a band you have to see live to appreciate their level of performance.” – DJ John Porter of Richmond, VA’s WCVE

Since 2013, the band has sharpened its sound and performance chops in clubs throughout Washington, D.C., Maryland, and Virginia. In 2016, they represented the Central Virginia Blues Society at the International Blues Challenge in Memphis, Tennessee and afterward immediately began to work on their debut album Grit (2017).  The band’s performances have generated quite the buzz throughout D.C and beyond. DJ Nick “Dr. Nick” Johnson of Washington D.C. radio station, WPFW declares, “Their onstage performance, with Robbin’s boundless energy, will leave you breathless.” The band soon were opening shows for The Nighthawks, Billy Price, Roomful of Blues, Lil’ Ed and the Blues Imperials, Albert Cummings, Selwyn Birchwood, and Coco Montoya.

Vintage#18 is Robbin’s first band, believe it or not, which was cooked up by many conversations between her and band member guitarist Bill Holter. By taking cues from the past, like groups from Motown and Stax, they made sure the sound, the look, and the stage presence are always in place. As for the sassy white dress, Robbin found a company to customize white dresses with glass beaded fringe and added the white boots to stand out against the all-black clad band members. “We always are dressing to impress, and no matter the venue, we’re always dressed. The audience and venue dig it, and some promoters have even confirmed if I will be wearing the dress,” Robbin states.

From various open mics and jams around the D.C. area over a year, Robbin met drummer Alex Kuldell, and after sitting in together at an open mic, she knew she wanted to perform with him. “Though I didn’t have any band members at the time, I asked him if he’d be the drummer. He agreed, and a year later, I met our guitarist Bill Holter at a blues jam. Bill brought our bass player Mark Chandler to the first rehearsal as a band in 2013, and we’ve been performing together since,” laughs the vivacious singer. Alex is a professional drummer for the United States Army Old Guard Fife and Drum Corps, an active-duty military band, and The MacMillan Pipe Band. Bill and Mark have been long-time players in various groups around the D.C. area.

After a year of uncertainty due to the Covid19 pandemic, the band is ready to go. If you can’t make it out to a show soon, push the sofa back, roll up the rug and dance the night away with Robbin Kapsalis & Vintage#18 on the stereo.