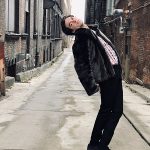 Cracking the egg that is Ben Stalets is two yolks; the first is lyrically driven songs, and the second is a sweaty rock n’ roll show. However, you prefer it; you’ll end up full.

Taking cues from 60 and 70s pop influences Toledo native Ben Stalets addresses the thorns in his side, both personal and worldly on his third and upcoming record, Everybody’s Laughing.  He starts to pick them out one by one with songs like “Everybody’s Laughing,” “Forbidden Fruit,” “Rock n Roll,” and “Maybe Love’s Not All We Need.” Ben and his band holed up in Detroit with producer Bunky Hunt who called the sessions: “Mystifying…. a cross between John Lennon’s Double Fantasy album and fellow Ohioan songwriter Aaron Lee Tasjan.” Everybody’s Laughing will be released March 2020 on WhistlePig Records.

The first single off the album is “Forbidden Fruit,” which is about feeling good; “What’s the harm in eating forbidden fruit if it makes you feel better? Wouldn’t you rather die happy then live with the perils of being a teetotaler? Maybe teetotalers are, in fact, happier, which is why they’re not writing songs like this, though. Joke’s on me,” states Ben. Video for the song was shot on location by Eric Kucinski at his trailer in Perrysburg Township, OH.

Everybody’s Laughing is a reference to a quote from Mark Twain’s social commentary book “Following the Equator,” “The secret source of humor itself is not joy but sorrow. There is no humor in heaven. The way I look at it,” says Stalets, “everybody is laughing, which means everyone is suffering— we’re all in this together.”

“The songs on this album are lyrically less cryptic,” Stalets explains, and yet another departure from the previous albums. “I feel more articulate in calling a spade a spade. I’m a lyricist first and foremost, and I had a bit of a breakthrough in how I feel about what I’m trying to communicate.” Thorns of love, acceptance, and participation are sometimes seen as sticky and bloody but can always be worked out through communication.

“Oh, but really what’s the difference

Between forbidden and what were given?

Seems like we’re pissing into the wind” – “Forbidden Fruit”

Ben enlisted his live band for the recording sessions giving the record some emotional fluidity from stage to studio.  Ben’s backing band includes long-time members Will Doremus and drummer Mark Poseler along with new-comers guitarist Justin Frey and Drew Rochette on the keyboard and harmony vocals.

When asked about a proud or Zen moment from the past ten years, Ben gives it some thought. “I’m most proud of the certain effects I’ve had on people with the very deliberate messages I’m trying to get across. I’ve purposely offered myself up as an example, so I didn’t seem like a holier than thou preacher. I’m in this for myself, but I’m trying to not do all my selfish work in vain.”

Ben just wanted to have one good song he could play for people that would blow them away. And humbly, he says, “[I’m] still chasing that.”

To watch the acoustic video of “Forbidden Fruit”: https://youtu.be/Li5wAsWCK7s