Kfhox Appears At NY Marathon – Lace up your dancing shoes! 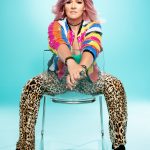 Appearing for the fourth time, Kfhox will be performing in the Bronx at the New York City Marathon on Sunday, November 3, 2019. She will appear, along with her longtime friend in music, Saiah, and music will be by DJ Ace of Spades at the Alexander Avenue location in the South Bronx, one of the first stops on the final leg of the marathon. The iconic run and its events are all-day and free, starting at 10 AM. She will be performing songs from her last album, Journey of a GemInEye and her forthcoming album, Love 360° out in early 2020, including her latest single, “L-O-V-E” that is out on all digital streaming platforms.

Her latest single, “L-O-V-E” is a seductive, flirty dance song filled with winks and smiles, combine that with the positive message of how love makes the world go around, and you’ve got a hit. Produced by Darrin “D-Roc” James at Stinger Boy Productions in Nashville, TN, for her forthcoming album, Love360° will be out in early 2020.

Kfhox has been a woman on a mission with her music since she was a kid. Growing up in Rhode Island, she was always dancing and singing to the radio, tv and the stereo. Kfhox has allowed music to be the north star leading her life’s path. She moved to New York for college and pursued music throughout her 12 years there. The New Yorker turned Nashville R&B/Pop artist says that music has been part of her DNA for as long as far back as she can remember. A free spirit by nature, Kfhox’s headphones throughout her teen years were filled with many different styles of music. Besides being an avid fan, she soaked up as much as she could from as many sources as possible, admiring the varying cadences and melodies from various styles of music, from hip hop to new age.

Losing her job in 2009 led to her epiphany that she needed to chase her dreams wholeheartedly. With her natural talent for music and years of musical training and thanks to many people in her community that believed in her as a musician, she conducted a crowdfunding campaign for her first EP. She raised over $11k through fan funding overall, but most importantly, she confirmed her internal belief that music was her destiny. She started connecting with fans on an intimate level, and her confidence rose even more. Her grassroots approach and crowdsourcing campaigns allowed her to receive invaluable feedback from fans of her independent projects. “Many of my fans have shared deeply personal experiences with me, and I feel like there’s a level of trust and honesty that exists between us,” Kfhox explains.

​Kfhox is excited about her new album “Love 360°, “This album feels like my arrival after ten years on the live music scene in New York and has a much more mainstream vibe with the same nuances that my fans have come to know and love. This album reflects the new level of self-love I’m operating from, and this music truly reflects that ascension,” she says.

Kfhox will be available for press interviews for and during the event. Please contact Jill Kettles at Miss Jill PR: T) 404-213-8542 E) jill@missjillpr.com – W) www.missjillpr.com

To watch the video for “L-O-V-E” click here: https://youtu.be/X-RUkpc2VfI

For more info on the NY Marathon: https://www.tcsnycmarathon.org/