“The Badlands are rich with musical soil!” Jennifer Lyn says 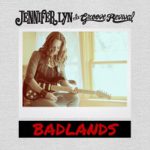 Marking Her Territory With Guitar Riffs And Grooves

The new album Badlands, from North Dakota Blues-Rock artist Jennifer Lyn, couldn’t come at a better time. Set for release on Feb. 2, 2018, her second album reflects her influences from rock to blues and back again. As a new generation takes the reins, keeping this kind of music alive is needed more than ever to remind us of our own history and preserve the love of this genre for generations to come.

Born in Minnesota, Jennifer Lyn grew up between two worlds: one, her family’s love and appreciation for traditional country, folk, and gospel music in her home; the other, the years she spent absorbing many diverse forms of music while living in various places throughout the United States. “My mom has a beautiful voice, and she used to sing to me as a child,” Lyn remembers. Growing up Jennifer learned she could sing at a young age. As a result, she was always singing along to her favorite songs, humming her melodies, and performing in the various school music programs.

After only knowing about four chords of the guitar a few years back, Lyn decided to buckle down and expand her horizons. This would be the payoff for it would help her songwriting out as well. “I was finding that not being able to play an instrument was really hindering my songwriting. I would end up humming the guitar parts to my band, which wasn’t very effective.” Jennifer took a serious look at what she wanted to accomplish as a songwriter and to be effective at her craft; she needed to take the plunge and get better at guitar.

After honing her skills, Jennifer to decide to front her band, Jennifer Lyn & The Groove Revival, and share her diverse music background with her growing group of fans. She has been wowing crowds with her energetic shows leaving them breathless.

Her debut album I’m All Wrong For You Baby (October 2016) touched on her musical diversity with songs ranging from traditional blues, rock, and ballads with gospel undertones. Her new album, Badlands delves even further and casts an eye on a blend of different musical experiences creating a variation of blues music that embraces a wide pallet of many sub-genres. Her songs on the new album are fueled by her soulful vocals, burning desire to play guitar and beautiful accompaniment from band members Darren King (bass) and Kevin Holm (drums).

“Every time I write, I pull from influences that I’ve been exposed to from childhood to now. I have a broad pallet of likes regarding the music I listen to, so I find that when I write, my music tends to pull from many different genres.” – Jennifer Lyn

Recorded in Bismarck, ND, Badlands was produced by international recording artist Richard Torrance (Capital, Shelter Records), who also produced her last album I’m All Wrong For You Baby and is featured instrumentally on the new album. Badlands weaves between hard-hitting, guitar-driven songs that touch on stories of love gone wrong and social pressures like a cheating lover or finding your place in today’s world. Songs like,”Burned it Down” and “Anything But Me” are more personal narratives speaking of life.

“For Badlands, my producer encouraged me to step-it-up a notch and added some additional instruments to really display the songwriting and compliment the stories I was trying to tell.” – JL

These stories are deftly crafted, and create an album of moments that spotlight Lyn’s solo voice and clean guitar speak. Talking about various subjects like overcoming the fear of love in the ballad “Give Into You” while the opening sparseness of the song breathes life into the words. The driving groove of the title track “Badlands” accurately echoes the heaviness of the lyrics and topic matter.

“Every song for me is very different. Sometimes when I write and my hand can’t move fast enough on the paper as the lyrics start pouring out of me. Sometimes it’s like Chinese water torcher, and I really labor to get to the point that I feel it’s correct and complete,’ states Lyn.

The traditional Blues format of “I’m Running to You” and “West to Bismarck” pay tribute in form and measure to those that came before. The Southern Rock influenced song “Gonna Let You Go” breaks any trance as the smoke of the electric guitar cuts through in the opening lines. The final song “Goodnight Sweet Darling” dives deeper into the diversity of Lyn’s childhood playing heavily upon her folk/country roots as she weaves a beautifully well-written story that leaves the listener wanting more.

All of these moments point to an artist wise beyond her years and on the move to preserve Blues music for years to come.

Watch a great behind the scenes video from Jennifer and her band along with her producer: https://youtu.be/SY2JfBCl_wY

Jennifer will be out on the road supporting the album, so check her website and social platforms regularly for updates!

The band has a CD release show on January 20, 2018, at Ramada Inn in her hometown of Bismarck check out her website for more info: https://jenniferlynmusic.com